Boss Steven Pressley gave us his reaction to the disappointment of the away defat at Plymouth shortly after full time on Saturday afternoon. 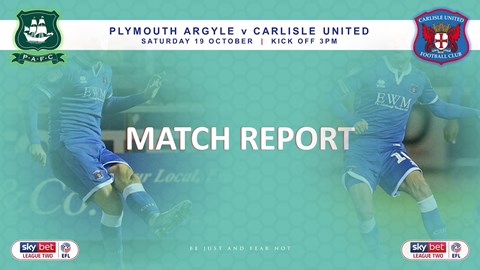 MATCH REPORT: Report from the Plymouth away game

“I think from 18-yard box to 18-yard box we were excellent,” he said. “We carried out the work that we’d planned really well, the tactical detail, the players’ attitude to the game was excellent.

“But what let us down was our final pass and our final moment when we created those opportunities. Defensively there was one moment in the first half when we didn’t defend a bread and butter moment.

“That aside the players were at it and aggressive in a lot of their play against a very good team. We came here, gave a good account of ourselves and leave with nothing - that’s the disappointing factor.”

“Of course it’s frustrating but I have to keep focused and believing,” he continued. “I’ve seen Jurgen Klopp talking about the world’s a circus these days, but my job is to analyse the game and look at it in a more balanced view.

“My game is not to be up and down continuously. My job is to ensure these players are ready for Tuesday again. That’s my responsibility. I have to keep working hard on them because I see some real green shoots.

“The two centre-backs that came in did really well, we worked tirelessly as a team and I was really pleased with many aspects. But, again we lose the game, and I understand that as a manager you are generally judged by results.

“I’m a manager as well that’s improving the players and they’re moving forward. I think once we keep improving then I think the results will come.”

On making sure the type of lapse in concentration which led to the first goal is eradicated, he commented: “To improve on that we have to defend the moment. We have a responsibility in these moments. That’s our job.

“As defenders, it’s the bread and butter of football and we have to do that. We have to get better at that. In the game they hadn’t really carve out too many opportunities and it was probably the only stage in the first half when they put us under any sort of pressure - we have to be more resilient in these types of moments.”

And having created a number of good attacking openings, he said: “There shouldn’t be a lack of confidence with our forwards. Hallam [Hope] scored last week and he gave a really good performance, and Fela’s scored five goals since coming here, so there shouldn’t be.

“I just thought our decision-making in the final moments, in the final passes, was the disappointing factor. A lot of our other play was very good. We hit the bar twice, these sorts of moments when the luck goes with you, it goes with you. But we can’t feel sorry for ourselves, we have to keep going and going, and I believe if we do that it will turn.

“We have to remember that you can make your own luck, this is football. Don’t feel sorry for yourself, you have to deal with adversity and disappointments, but then you have to come back, and we have to do that Tuesday night because there’s a lot to take from this game.

“We did a lot of good work against a good side. Ultimately though we didn’t get anything from our good work.

“I suppose the frustrating thing is that we hit the bar twice, we had a goal ruled out for offside and Jack Iredale was through at the end and the goalkeeper saved. Those were some of the key moments I’m talking about.

“If you look at them, apart from one or two early moments they didn’t carve out many chances. From that perspective there are some real positives to take from the game.”

With changes made to the starting eleven in an attempt to freshen things up, he said: “I thought that Jon Mellish and Jarrad Branthwaite gave really good accounts of themselves.

“Jarrad, for 17, gave an outstanding performance and that was a real plus point. Byron Webster in the middle also managed them really well, supported them really well. There was a lot of good things. It was just our final moment, the final pass, that was the big disappointment.” 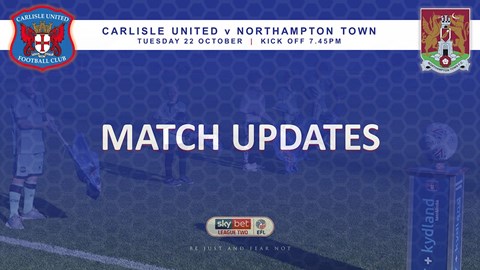 MATCH UPDATE: Tips ahead of the visit of Northampton

With some expected starters taking a place on the bench, he explained: “I spoke to the players I made changes for and explained my decision. It’s never the easiest job but it’s the job you have to do as manager.

“I felt we went with the right side and I felt we talked and planned the tactical work. and I thought they carried it out brilliantly. We were really aggressive in our pressing, good on the turnovers, but the key moments in terms of final pass, final decision were the moments that let us down

And with the side desperate to get back to winning ways, he told us: “The players are working exceptionally hard. I feel the margins just now are going against us. But we’ll improve and we’ll continue to improve.

“My job, of course I’m judged by results, but also by improving players and eventually getting those results. I’m seeing many of our players improving. I’m seeing great performances from lads who were a long way from it a couple of months ago. I feel with time we’ll get to the place we’ll need to be.

“I accept that everybody is disappointed right now. We’re in the early stages of this team, and if you look at the progress of many teams with this type of transition to their squads, it takes time.

“Unless you have huge budget that you go out and buy the best players, it takes time. We are conceding too many goals, we know that, and we have to improve in the opposition third, we aren’t hiding away from that. We’re relishing the challenge because we feel that turning those margins in our favour is going to come.”

On the absence of Harry McKirdy, he told us: “He tried to train Thursday but he had a reaction from it. He came in to speak to me after training and just felt he wasn’t quite right.

“It would have been good to have him here, the last thing I wanted to do was put him on as a sub and he breaks down. He’s rested up for the weekend and hopefully if he’s not available for Tuesday then he will be for the following Saturday.”