United boss Steven Pressley gave us his reaction to the away draw at Orient shortly after full time on Saturday afternoon. 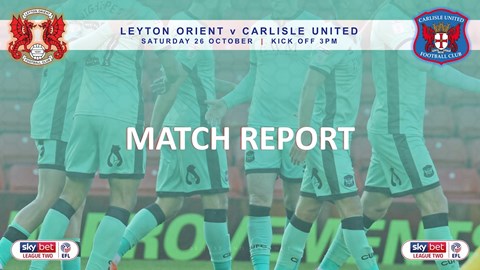 MATCH REPORT: Report from the Orient away game

Speaking first about the importance of bringing an end to the frustrating run of defeats, he said: “That was really important. I’ve said that this club has a plan, this club has a way forward, but you only get to do that if you address some of the short-term deficiencies.

“To a man the players were amazing today. We couldn’t quite get to grips with it in the first-half in the system we were playing. I was trying to get several instructions on, but tactically we didn’t quite get it right.

“I was forced to make the change at half-time and we were much better after the break. I had no complaints about the effort in the first half, the work ethic was good, but we were just lacking in a couple of areas tactically.

“If you look at the free-kick transition in the last minute of the first half, the way our players got back to defend, it said everything about what they’re trying to do just now. I thought we showed great resilience and mentality and I’m really proud of the group today.”

With the team having struggled to gain a foothold in the first 45 minutes, he commented: “We were working hard but it wasn’t at the right times or in key areas. I saw that there were things we could tweak and the players responded to that.

“It was nothing to do with our work-rate. Just tactically, the shape, we didn’t make it work for us and they got on top because of that. We addressed that and our second half performance was amazing.

“What I will say is that I didn’t think it was a penalty. I actually thought the referee was good today, I thought his assistants were good, but I thought that was the wrong call.”

“I’ll be honest, it’s been a tough period and it still is,” he continued. “It’s only a draw, but it’s a draw, and when you see the reaction of our supporters you can tell that they truly appreciate the efforts of the players.

“That’s really important to me. I’ve said it time and time again, these players are fully behind what we’re trying to do and I think today proved that. But, I must reiterate, it is only a draw today, but a draw at a very difficult venue with a team prior to the weekend’s results that had won three on the bounce.

“They are a team with a new manager and they took the lead in the game, which gave them added confidence. It took a lot of resilience and mentality from our players to deal with all of that, so well done to them.”

With the second half performance taking the Blues to a position where they were pushing to win the game, he said: “There’s no getting away from the fact that the first half was a real struggle. Like I say, that’s because I felt we weren’t getting the pressure in the right areas of the pitch and they were able to dictate many aspects from that.

“It was nothing to do with the efforts of the players, it was a couple of tactical tweaks we needed to make to the shape of the team and that allowed us to really pressurise them and get to grips with the game.

“I took Jarrad [Branthwaite] off and replaced him with Fela [Olomola]. That was nothing at all to do with his performance, it was simply a tactical change that I felt we needed to make.

“The difficulty we have is we’re a new team that’s still trying to find our way. If you look back, we had a period when we were losing a lot of goals and we had to change the shape of the team and address certain aspects.

“From a defensive perspective we’ve improved greatly. Not in terms of sometimes the goals we’ve conceded but, if you look at the chances we’re conceding, they’re few and far between in many of these games.

“It’s hard when you lose these games to say to people that we are actually improving. We had to address that and we moved away from the preferred system to try and tighten things up. The good thing is that we’ve seen an improvement there, hopefully our defenders have gained more confidence, and the next stage is how can we score more goals.

“That’s always the situation with a new team. You address one thing and lose out on another, but eventually, hopefully, we’ll evolve into a good team.”

“I know with where we are in the table that supporters at times will question me saying things like that, but this group of players are working exceptionally hard. We do need some breaks, but we also need to do better on quite a number of moments.

“On that, I thought we were much better in both boxes in this game. Also we didn’t turn down the opportunity to put the ball in and make them defend, which we’ve bene guilty of before.

“We were much improved in terms of players arriving in the final third, and that’s another aspect we’ve been working towards. We looked a much bigger danger. As I’ve said, it is only a point today, only a point, and we have to follow that up next week with another positive performance.

“I’m pleased we stopped the rot and it gives us at least a foundation to build from.” 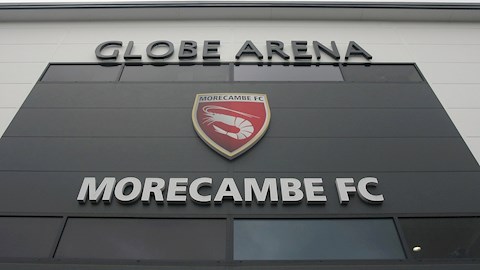 United’s equaliser was Jack Iredale’s first goal for the club and first from a set piece for the team this season.

“I spoke to the players about that after the game,” he confirmed. “We work hard on these things, and again there has to be a desire and determination when the ball’s delivered in.

Speaking about what the win will mean to the players, he said: “It’s really important. I get support from behind me, from the players, I know what we’ve got in here. I’m not lying on that, that is the fact.

“We have to get more points on the board, we have to keep improving and working hard, keep driving this club forward. If we get that type of performance and effort, you can see the reaction from our supporters.

“On Tuesday we were every much bossing the game but we’re a little bit fragile just now. That’s why I was so pleased with the second half. We showed a real resilience in our performance.