United boss Steven Pressley gave us his reaction to the home defeat against Crewe shortly after full time on Saturday afternoon.

“It’s funny, because I’d spoken to the group prior to the game about different aspects and the one thing that I’d always spoken to them about was the fact that within a shape it’s the work ethic within it that’s the most important aspect,” he said.

“To go two-nil down I still believed that if we could get that part of it right we could get ourselves back into the game, and we did. The disappointing thing is that after showing such a good character and energy about us in the second half, and getting back to 2-2, that we didn’t go on to win the game. That really disappointed me because I thought we would go on and win it.”

Having given two first half goals away to leave a mountain to climb, he commented: “At home, you know, we wanted to start positively and aggressively and we probably didn’t do that.

“But in the second half we did much better. The frustration was we didn’t give up … although our attacking performance and press weren’t particularly good in the first half, we actually didn’t give up hardly a chance in that period, but we still found ourselves two goals down.

“We were much more aggressive in the second half and that gave us a much better performance. It was just disappointing that having got the two goals back we didn’t then go on to win the game.”

Having gone into the game looking to replicate the performance at Newport, he said: “As I said, the second half was far more like the Newport performance. We were more aggressive in every single aspect, but it’s yards, and if we don’t go those extra yards, or if we don’t carry out the full intent of the press against a good side, because Crewe are a good side, you will be punished.

“We have stay focused on what we want to do and there were aspects of this performance which were good. There’s areas we can take on, but there’s areas where we need improvement, and we know that. We’ll work tirelessly towards amending the areas we need to do.

“I’ve said this time and time again that we have a group of players who want to do well for this club, that are trying to do well, and it’ll take a little bit of time. It’ll take perseverance, it’ll take character through these difficult times, but we’ll get there.”

And he insisted that his belief that the group will find the consistency is unwavering, despite the difficult start to the season.

“Of course I believe in the group,” he told us. “I’ve told you I see them every day. I see them in the dressing room there, I know what we’ve got. The supporters aren’t happy, they can vent their anger at me as much as they wish, no problems, I’m the manager and I accept responsibility. 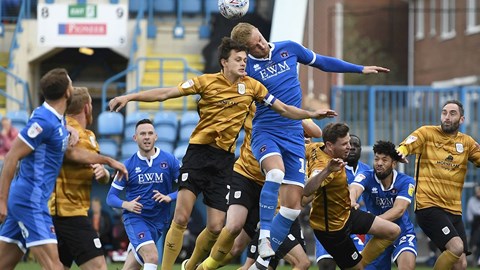 “I understand the frustrations from the fans, of course I do. That’s football, I’ve been there and I’ve been in the game for a long time now, so I understand it. I accept what goes with it, no problems at all.

“As I’ve said, we need to continue to improve and continue to work hard, and it will come and everybody will start to feel good about their team again. We were two goals down but we got ourselves back in the game, we did many good things in the second half.

“It’s just those yards, and it will always be those yards. If we can show more consistency in that part of the game, we’ll be a good team. I’m frustrated, because like any manager you want to be experiencing winning football.

“We had a lot of change in the summer, but in my opinion we are improving. We showed good signs in certain periods of the game. Part and parcel of football is that we take our medicine, we played against a really good side today. Crewe are ahead of us, and our goal is to close that gap.

“We know the fans don’t enjoy losing, neither do we, and we also know it’s our responsibility to give them something to get behind.”

On the reaction in the dressing room to the defeat, he said: “They are all disappointed. I said at half time and full time that it’s about the yards. They understand their jobs and responsibilities.

“When we play with the intent we showed in a spell in the second half, we get the rewards. We were that yard away, and that’s the disappointing factor.”

And on team selection, he said: “I think based on the performance of the two strikers at Newport the team was always going to be the way I went. I didn’t feel there was any need to make change, and I thought they’d earned the right to play again.

“Obviously Nat came off at half time with an injury to his thigh. He got a dead leg and couldn’t continue. I thought Jon [Mellish] came on and did well and I was really pleased with his performance.”