United’s youth team went out of the FA Youth Cup in heart breaking fashion at Brunton Park on Monday night as they were hit by a late Bradford City goal, with the sides having gone toe-to-toe for almost 120 minutes. 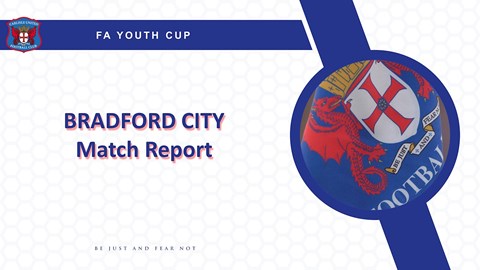 YOUTH: Report from the FA Youth Cup second round game

Academy boss Eric Kinder spoke to us about the game shortly after the final whistle had blown.

“There were periods in the game where we should have really put our foot down and gone for it, but we didn’t and we allowed them back in,” he said. “It was, as the scoreline suggests, a very close game and it was like that all the way.

“They started better than us but, saying that, we had an unbelievable start to the game by going ahead so early. They probably passed it better than us in the first half and they looked after the ball well.

“We were glad to get to half-time, to be honest, but there was then a period in the second half where we just needed to push on and go for it. Unfortunately we didn’t get the tempo up and we weren’t moving the ball fast enough, and I felt that was a missed opportunity to win that game.”

On the quality of the chances created, he commented: “We did have good possession in good areas but they’ll be saying the same thing, that’s how tight it was. They also had several half chances they didn’t take.

“Scoring goals has been our problem all season, we just haven’t got that natural out-and-out goal scorer that our approach play sometimes deserves. One thing I will say is that we can never accuse this group of giving up. They just don’t give in and that’s a massive plus.

“I said to them at full-time that once this cup is over with you start looking to next season, and when I say next season I mean the second years have got to start pushing on now and try to force their way into a professional contract.

“The first years have got to get themselves ready to step up and like the under-16s, with Jack Ellis and DJ Taylor, and Gabriel Breeze who was on the bench, it’s up to them to get as much game time as they can. That’s where my focus is now.”

With a huge amount of excitement surrounding the competition there was obvious disappointment for the young Blues when the full-time whistle blew.

“I turned to Mark Birch about three minutes before their third goal went in and I said ‘this isn’t going to penalties, somebody is going to score because somebody will slip up here’ but there was no way you could predict which end it was going to happen at.

“Unfortunately for us it was at our goal and it was a sad ending to what had been an entertaining game. Like I say, we can play better than we did in the first-half but we were much better after the break.

“I thought they were a decent side but I’m a little bit disappointed with the way their players behaved at the end. But, listen, emotions take over when you’ve just won a game with a minute left of extra time, so they can be excused for it.”

“There were some good goals amongst it all,” he reiterated. “Their second goal was one heck of a strike – where did that come from! And then Jamie Armstrong got us back level with another stunner.

“At 2-1 down I thought we looked out of it, but we were then controlling the game and that was when we should have gone up a few gears. That was our opening and we didn’t take it. Once we got into extra time there were a lot of tired legs out there, but we finished the game looking strong even though it didn’t go our way.” 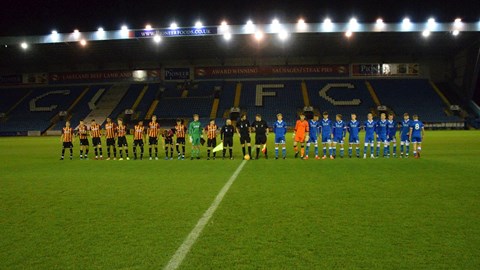 And on how to manage the disappointment within the group, he said: “They have to pick themselves up, that’s the nature of the game. It’s a competition we were never going to win but it’s always nice to get to the third round if you can.

“That was our aim, because we wanted to play against a Category 1 club in Stoke City, but it’s just not to be. The lads gave it a really good go and I can’t criticise them at all. They kept going and going and that’s a really good thing to see.

“What they’ll learn from this is that they have to take advantage of those moments in games when you’re on top. You simply have to score. Against Salford we wanted to play like Barcelona in the first 10 minutes and we got picked off.

“We were more direct last night and sometimes you need to play that way for the first 10 minutes at the same time as making sure you’re still in it. Then, there are periods in every game where you’re on top, even if you’re getting beat. Those are the periods where you have to make it count and they have to learn that.

“After we got back to 2-2 I honestly thought the third goal would come in normal time and it would be ours. They seemed to have gone and we had chances in the last 20 minutes of the game to win it but, to be fair to them, they came back at it in extra time.

“It’s disappointing, of course it is, but we still have a lot of work ahead of us this season.”

YOUTH: A different type of challenge


Under-18 boss Mark Birch gave us his reaction to what was another entertaining game following his team’s 2-1 away victory against Carlisle City on Wednesday night.