United boss Steven Pressley spoke to us about Saturday’s visit of Macclesfield Town as he looks to get his side back to winning ways here at Brunton Park. 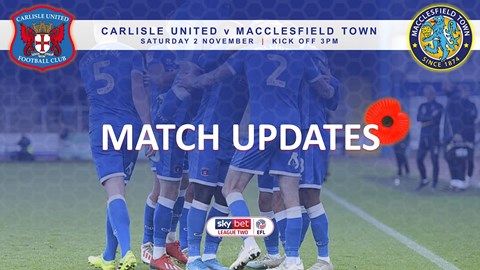 Speaking first about the injury situation, he said: “At this moment in time we have to say that Stefan Scougall is a doubt for the weekend.

“Christie Elliott is definitely out and he’s going to see a specialist on Tuesday regarding a problematic ankle that he’s had for several years now, because it’s flared up a little bit.

“It’s difficult to say how long this will affect him for and we should know better about that after he’s seen his consultant on Tuesday. We hope he won’t be out for a significant period, but we can’t guarantee that until we know what we’re dealing with.

“Obviously the best outcome is that he’ll be able to carry on, maybe with treatment or slight injections, or something like that, but until we know for sure we can’t give a definitive answer.

“With Stefan, we hoped he’d be joining in training today [Thursday] because we wanted to do a test on him, but he didn’t quite get to that stage. We’ll reassess him on Friday and then we’ll know for sure if he’s going to be available or not.”

“As well as that we have Byron Webster suspended with him having picked up his fifth yellow card last Saturday,” he added. “That gives others a chance and it might result in us being an exceptionally young team at the weekend. That’s something that excites me and it’s part of the plan moving forward.

“This’ll be a real test for us and if do we have a very young and energetic group out there it’ll be a game where they’ll need their supporters fully behind them, and I am really excited by that.

“The good thing for us is that developing and using young players is part of our plan. We will develop a young, dynamic team over time and we’re starting that process now. We do feel that we’ve got some good young players within the academy and we know we have to find additional players along with that.

“We’re looking to work towards being the energetic team we’re talking about and hopefully the weekend will be the first sign of that.”

On introducing younger players to the first team environment, he told us: “When young lads are around the first team, as ours have been, they benefit from that a huge amount.

“It helps them to understand what’s required and I just feel that it’s vitally important to be exposed to first team football. I’ve always been a manager that doesn’t fear using young players and we’re seeing with the likes of Branthwaite, Sagaf, Iredale and Mellish that they’re all beginning to find their feet.

“They’re all starting to move forward and those are really encouraging signs for the football club.”

And on the game itself, he commented: “It’s a game we’re looking forward to and it’s one we desperately want to win.

“Everyone knows about the off-field problems at Macclesfield at the moment and I just don’t know how they’ll approach the game from a psychological angle because of that. I don’t know the spirit within the club because of what’s been going on, so it would be wrong of me to comment.

“That means that all we can focus on is our own preparation. This was the first week in some time that we’ve managed to have the vast majority of the players together that allowed us to really work on a couple of aspects we wanted to improve on. Hopefully that will result in a good performance at the weekend.

“I can’t guarantee that but we’ve worked really hard on a number of areas and I hope we see it all come to fruition. Look, when a team hasn’t been getting the results it wants there can be an added feeling of tension when you play at home, but that’s something we just need to deal with.

“I accept the pressure as a manager, this is normal, and it’s all part of the job you have to do. It’s something we need to become better at because probably, in recent weeks, the good performances have come away from home.

“We played particularly well in the first half against Northampton up here and we want to see more of that. There’s no doubt about the fact that we want to take it a step further and win the game, because we’re desperate to do that for these supporters.”

“Training has been really positive and the second half against Leyton Orient has given us a lot of belief,” he added. “We have to carry that on, it’s as simple as that. Our responsibility as players and staff is to play with the type of energy that gets the fans behind what we’re doing.

“If we can do that and get them behind us it becomes a really important part of the game. This is a great place to play your football when the fans are cheering you on. Like I say, it will be a young team at the weekend, and I know they’ll grow into it when they hear the supporters getting behind them.”

With the team having changed formation to 4-3-3 at Orient last weekend he admitted that his preferred formation can be an effective tool when everything clicks into place.

“We changed things for the second half last week and it gave me food for thought,” he said. “The truth is that my preferred system of play is 4-3-3, but part of my job as a manager is that I have to be flexible and adapt to certain situations.

“In the early part of the season we were giving up so many chances and goals that we had to make a change. We went to three at the back, which allowed us to play with wing backs, and in terms of chances that were being created against us, we nullified them greatly.

“At the same time, while we tried to fix that end, we weren’t as potent at the other end, so I need to try and rebalance it and improve at the other end. This is what we’re trying to do and it’s part of the journey of the team.

“It’s not as straight forward as people think, but it’s my job to continue to make players better which means we will then be able to adapt to different systems. You can’t be a manager who has a fixed way and won’t change, because you won’t get to where you want to be by doing that.

“We have to be flexible along the way, but also focused on where we’re trying to get to.”

“Macclesfield have played with a 3-5-2 or 3-4-1-2 system quite consistently and they have some good technical players,” he explained. “They’re 15th in the league and considering the upheaval and the difficulties they’ve had, it’s a good return.

“They’ve only last once in their last four, so they’re showing some form. It’s not going to be an easy game, but it’s a game at home that we’ll be looking to win. Every game in my opinion is a must-win game, I think if you go into any game and it isn’t must-win, then you aren’t a true winner.

“I hope we can continue from where we left off with the second half performance last Saturday. We played fast, aggressive football and created good opportunities, and that’s what we want to do in front of our own fans. We want our fans to keep coming back, and the only way we can do that is by getting results.”

And, of course, there’ll be a familiar face with the Silkmen at the weekend.

“It will be nice to see Arthur [Gnahoua] again because he’s a player I had a lot of time for,” he said. “It didn’t work out for him here after his injury, but it’s good to see he’s managed to recover from that.

“Dolly helped him a lot with his recovery so he’ll be pleased to see him doing well as well.”