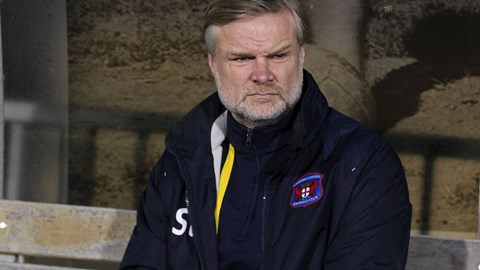 MANAGER: Great credit to Dulwich for the way they approached it

“I think I’ve already said this, we have to give credit to Dulwich because they made it a very difficult game for us,” he said. “We can relax now and enjoy watching the results come in from around the other games. Then it’s the draw, but my weekend is still a busy one because I watched MK Dons play Port Vale on Saturday.

“I have to say that it wasn’t a controlled performance, but it was a very professional performance and hard-working performance. I’m a manager who wants to control the game more than we did, but we had to make a couple of sacrifices with the way we felt the game would go in mind.

“I could have gone with the 3-5-2 and had a little bit more control in the middle of the pitch, but I don’t think we’d have counter-attacked with the same effect. I’m pleased, I thought we did the basics of the game well and we had to defend a lot of moments. The most important thing is that we’ve come away with the victory.”

On two goals and assist from livewire Harry McKirdy, he commented: “Harry is making good contributions, but it’s hard work trying to manage him.

“I really like Harry, he’s a player I think is improving all of the time and he’s working really hard for the team. You have to accept certain aspects of his performance, but we must remember he’s only 22 and he hasn’t played a lot of football.

“His finishes were clinical and he’s got himself another assist as well, so that’s pleasing. It was a good ball to him from Mo Sagaf for his second and he showed great composure to finish it off.

“Let’s not forget Jarrad [Branthwaite] as well. To handle the occasion in the manner that he did and to play up against that kind of football was superb. He was a real credit to himself again and he’s an amazing prospect and, as I said earlier in the week, he’s somebody I’d like to keep at the club so that we can build something round him.”

The Blues are number 7 in the second draw which takes place live on BBC 2 at 7pm on Monday night.

“The draw will be another excitement for our supporters, who deserve this kind of thing. I think if I was going to pick for the next round I’d just want a home draw. We don’t want to face this type of game again, because it’s a no-win situation for ourselves. It would be great to get a home game with a real opportunity to progress.

“We hope the last three results mean we’ve turned a bit of a corner, but I’m also realistic in terms of where we are just now. We’ve got so much work ahead of us, we had 15 new players in the summer and a lot of them were young development players that we’re trying to improve, and that will take time.

“I accept the criticism that comes my way, but hopefully in time we’ll make it a club we can all be proud of. We’re in a better frame of mind after our last three results but I’m not fooled by this, because I know how far we’ve still got to go. We’re in the early stages of a transition which will take years and years, and I want to be part of that.”

Taking his first look ahead to the Leasing.com Trophy game at Morecambe on Tuesday night, he commented: “Christie Elliott will be a consideration for Tuesday, we’re hoping he’s going to be okay. He’s had an injection which we hope will settle it down.

“Stefan Scougall will probably still miss Tuesday, but we think he’ll be close for Saturday. Jack Bridge has been struggling with an ankle problem of late as well, so that’s another we’ll take a close look at.”