United boss Steven Pressley gave us his reaction to the Emirates FA Cup first round victory at Dulwich Hamlet which took the Blues into the Monday night round two draw as ball number 7. 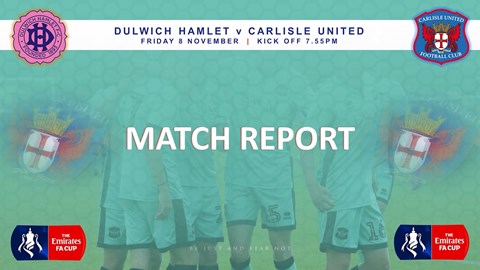 “I thought we were really devastating on the counter-attack tonight, but I have to give great credit to Dulwich,” he said. “We’d done our homework on them and we knew what to expect, and that was the reason why I played with a back three.

“The aerial threat was extremely good from their number 9 and I knew we would have to deal with that. They look to hit him and to get knock-ons from those situations and I felt that it was very important for us to fill the holes.

“In general we defended the basics of the game really well and these were really pivotal aspects of our performance. It wasn’t a performance where we controlled the pace of the game by our fluency of passing – not by a long way – and that’s credit to them and the intensity of the way they went about their business.

“The most important thing with a game like this is that you get through and, in the end, to win 4-1 away from home with a televised game is a good and positive result for us.”

Speaking more about the fantastic approach shown by the home side, he commented: “They didn’t let up and we knew that would be the case. We prepared for it but they still worked so hard that they put us under some good pressure.

“Our defenders stood up to it really well, I don’t recall Adam Collin having too many tough saves to make, and we made sure we showed what we could do when we went on the counter. I know we scored four goals from those moments but I will say that I thought our final pass could have been much better.

“Everybody talked about it being a great experience for Dulwich live on the TV but for many of our players it was their first experience of being live on TV. It was an occasion we had to manage and I thought we looked a little bit nervous in the early stages, but thankfully we managed to get through.

“But, the attitude shown by our players was excellent because these can be tough games to navigate. My preferred system is 4-3-3 where we get three men in the middle of the park and they’re able to dominate the ball better than we did in this game.

“I looked at what Dulwich do and I decided to make the change to make sure we still had a threat on the counter-attack at the same time as filling in the gaps at the back. It left us with a body short in the middle of the pitch so that meant we didn’t dominate the football as well as we would have liked, but it was effective in the way we looked overall.”

With United’s first goal coming from a break, a cross and an Olufela Olomola finish, he told us: “We’ve worked a lot on crossing and finishing in recent weeks. I’ve spoken to certain players about the positions they need to take up and it was really pleasing to see that we scored a number of goals from those situations.

“But also, let’s not forget the goal from Mike Jones. It was an amazing strike and I’m really pleased for him. He’s such a great character and the timing of it was a really pivotal moment in the game.

“We’d spoken at half time about not giving Dulwich anything to cling onto and we gave away a goal and a free kick in area where we’d highlighted we must not do that. They then put it and they scored from it and suddenly they’re right back in it.

“That’s why Mike’s goal was a huge moment in the game because it settled us back down and we were able to breathe a bit easier again. It’s a shot he caught on the sweet spot and it was going in from the moment it left his boot.”

And on another stunning individual display from Harry McKirdy, he said: “We have to remember that he’s still only 22 and he still hasn’t played a lot of first team football. But, having said that, he’s such an exciting talent.

“We know, like Nathan Thomas, that these are players who can make a real difference. He’s helped to make the difference tonight and he can feel very pleased with that.”

The Blues now have two wins and a draw from their last three games as they head into another very busy period.

“Make no mistake, tonight is a really good result,” he said. “This was a big potential banana skin, live on television and in front of a full house, and with Dulwich looking at it as a real cup final for them.

“Being unbeaten in three is a sign of a little revival but there is still so much work ahead of us. We can’t take the foot off the gas. We have to make winning a habit and we will only do that by working hard, as we are at the moment.”

And on the 500 fans who made their way into Champion Hill, he told us: “Fantastic. It’s good that we’ve been able to send them up the road very happy. I want to see them celebrating with the players at the end of games and the more performances we give and the more times we win, the more we’ll be able to create a greater bond with the supporters.”