United head into this weekend’s away trip to Vale Park looking to build on the four points picked up from their last two league outings but midfielder Mike Jones spoke this week about how tough the game is going to be. 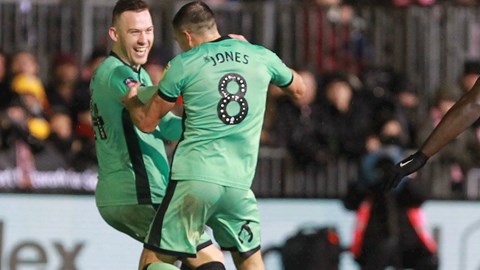 INTERVIEW: He always asks me if I've scored

“They’re on a good bit of form at the minute and they’ll obviously be looking to push on with that,” he said. “I always like playing there, it’s a big pitch, a bit like ours. If we can go there with the confidence we’re in now and express ourselves then I think we can give them a lot of problems as well. It’s a good game to look forward to.

“It’s a big game because we’ve had a mini-revival before Tuesday and they’re in good form. It’s a place I always enjoy playing personally because it’s a nice, historical ground. It’s one I’m very much looking forward to and the team should be as well. Just because they’re in good form, we’ve still got to go there and look to win.”

With Richie Bennett, Shaun Brisley, Mark Cullen and Mike Jones in the away dressing room, he’ll be coming up against some very familiar faces come kick off time on Saturday afternoon.

“They’re all good lads and players I’ve enjoyed playing with in my time here,” he confirmed. “It will be good to see them but hopefully we’ll be leaving there with three points at the weekend.

“Everybody knows I got on well with Luke, I still keep in touch with him now, so it will be nice to lock horns with him, shall we say.

“Whoever is playing the fact is that we’re looking for consistency, That comes with the team being together for a bit, learning about each other more and everyone getting settled. Hopefully we’re at this point now but we want to kick on and prove that’s the case."

And having come through the other side of a tough run, he admitted that it had been a frustrating period for the players in the dressing room.

“It has been a disappointing time,” he told us. “The fans are frustrated, but nobody is more frustrated than the players, staff, everyone in here. We’re all trying to pull in the right direction, we all know we’re in a position in the league where we shouldn’t be.

“It’s for all of us to get out of it and no-one’s working harder than the staff and players to do that. We’ve had some good spells, but you do get these bits of form where it all seems to be against you.

“It’s everyone pulling together that gets you through it, and you then come out of the other side better for it. We definitely want to be looking to kick on. When you think about it, we got a lot of new faces in the summer, a completely new team, and we’ve probably been a bit hit and miss.

“We are where we are in the league which is a very disappointing position, but if you look at some of the games – Barnsley, Rochdale, against good teams, early on in the season we played some good stuff. We’ve just been a bit unfortunate at times and we’ve been our own worst enemy. Hopefully we can kick on and the second half of the season can be a real pushing on time. We just need to keep taking small steps in the right direction.”

The immediate future brings games against Port Vale and Cambridge – teams United will be looking to take points off with a view to tightening things up in the mid-table area.

“As long as we use this now as a platform, as a mini-revival, and we can kick on a bit, we’ll soon be away from where we don’t want to be and more towards where we want to be. These games now are the ones we want to claw back, definitely.

“That’s the first and foremost aim. We want to be up at the top but it’s going to take a bit to get back there. We need to claw those teams back first and then kick on from there.”

And on his own form, he said: “My form dipped a bit in the last few games before Orient, and nobody’s more disappointed than myself when that happens. But I’ll always come out fighting and try to pick it back up. I like to think I’ve done that, and I want to carry it on.”