Caretaker boss Gavin Skelton gave us his reaction to the weekend draw against Cambridge shortly after full time on Saturday afternoon. 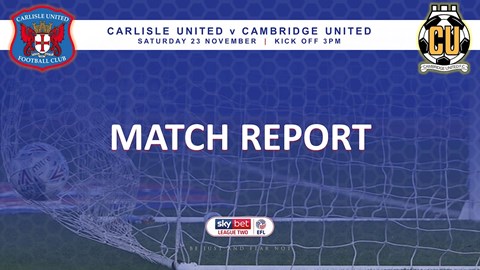 “The positive is a clean sheet and I thought we looked comfortable and compact in defence,” he said. “We didn’t really give them any chances, which was pleasing, and you never turn down a point, even though it’s obviously all three that you want.

“Was it a classic? No. Was it free-flowing football? No. We can’t hide behind that fact, but we did have three or four really good chances to win it, and that isn’t unlucky, it’s that bit of quality and making sure that you’re prepared to gamble in the final third.

“We had free kicks which bounced inside the six-yard box, but there was nobody there to get onto them, and that’s disappointing. It’s the difference between us not winning a game this week, and Port Vale beating us last week. You can say it’s unlucky, but it if you do gamble when crosses are coming in it will lead to goals.

“Fela will be disappointed not to score because he had a couple of decent chances, and getting crosses into the box was something we’d talked about doing. It became frustrating that we didn’t keep doing it because we needed to ask them more questions.

“It’s a point and a clean sheet, I thought Jon Mellish did excellently and that’s pleasing. I thought Ryan Loft and Canice Carroll were impressive. Was it a fantastic performance? No.”

“The funny thing is that it’s the type of game you win if you’re in the top half of the table,” he continued. “That’s because you have that belief that you’re going to get a goal when results are going your way. 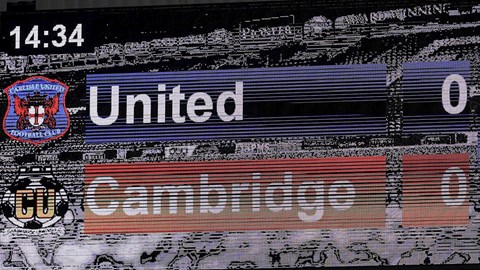 “You could see the players on the pitch wanted to be positive but it was almost a case of stick or twist. There was a nervousness out there, we can’t hide from that, and if we’d won a few of those I think we’d have gone on to win that one.

“It’s when we start to win those games, which we think we will, that it will lift the crowd and help us to get some momentum going.”

Speaking more about the clean sheet, he said: “That’s the good thing for the players. I thought we anticipated things really well defensively.

“We were comfortable in possession at the back but we moved it too slow. Cambridge were quite compact, which made it difficult to break them down, but if we’ve been sharper in our passes we’d have been able to bring our wide men in more.

“We kept our shape, which nullified their threats, but unfortunately we didn’t capitalise on that by pushing at them more. The boys are disappointed in that dressing room because we felt it was a game we could have won.”

On the absences of Jack Bridges and Elias Sorensen, he told us: “Elias had a migraine so we sent him back to Newcastle so that he could be assessed by their doctor.

“Jack had a stomach upset so we felt it was best to keep him out of the building so that it didn’t spread."