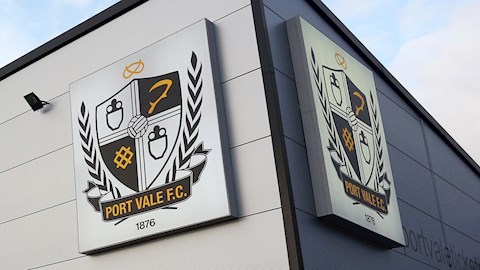 AWAY DAYS: Ticket information for the trip to Port Vale

And, having come close to a slip-up when United played Tamworth during his first spell with the club, and again with Notts County when they went up against Boreham Wood, he confirmed that the first-round meeting at Champion Hill is not one to be taken lightly by anybody.

“We have to approach it just like every other game,” he said. “We’ll prepare exactly the same as we would for a league game and we know what we’re going to come up against. They’re going to have a real good go at us, there’s no two ways about that.

“The game will be one of the biggest of their season and they’re going to give it everything they’ve got. We have to match that and make sure our quality comes out on top.”

“We can’t look at what division they’re in or league positions or anything like that,” he insisted. “We have to treat them with the upmost respect and we have to perform to the best of our ability. If we don’t, we’ll cause ourselves problems, and we don’t want that because the aim has to be to get into the next round.

“Looking back, we played Tipton when I was here first time a few years ago and we obviously got through that one. We almost slipped up against Tamworth though, but we got there in the end, and I’ve had non-league opposition at a few of the other clubs I’ve been at where we’ve almost come a cropper. Touch wood it hasn’t happened so far.”

With the game being broadcast live on BBC Two on the night, we wondered if that brought any added pressure or tension, particularly for the younger members of the group who haven’t experienced anything like this before.

“It has to be a normal week leading up to the game,” he commented. “We’ll worry about our own tactics and shape, and how we’re going to play, and we’ll make sure we’re in the right frame of mind.

“When the game is on TV it always adds a nice little edge. You watch this type of fixture in the early rounds on telly all the time because everybody expects an upset and, in fact, everybody wants an upset if they’re a neutral fan.

“That does bring an extra little bit of pressure with us being the league team, but we should be able to handle it. Any time you play on TV is a nice bonus but you’ve got to be able to cope the occasion.

“It’s just the same if you’re in front of 20,000 people, or whatever the occasion is, you’ve got to be able to handle it. It’ll be a learning curve for some of our young lads, of course it will, but they’re professional footballers so they have to be able to go out there and handle themselves professionally and get the job done.

“These ties are good ties and it’s what the cup is all about really. It’s definitely a game to look forward to. The aim for clubs at our level is to try to get to round three, and for the likes of Dulwich it’s to get to round one and get up against a league team, like they have done. It’s all about trying to get a big team and seeing how far you go, for both clubs.”

The consequence of a defeat is, of course, the headlines that follow, and the United skipper confirmed that the team will be looking to avoid that at all costs.

“No, we don’t want to be the Saturday morning headline,” he told us. “We just need to get the job done whether it’s a last-minute winner or whatever it is, just get the job done and get into the next round.

“It doesn’t have to be glamourous, just get into the next round, see who we get and go from there. What we know is that it’ll be a fast-paced and high tempo game and they’ll try to get a lot of balls into the box. Having said all of that we know if we do our own jobs right we should come out on top.

“There’s a lot of excitement around it because it’s a great competition. I think it’s the best cup competition in the world. I’ve played in it for a lot of years now, but I still always sit down to watch the draw for the first round and it’s exciting to see who you’ve got.

“The fact that the fans have taken all 500 tickets shows they feel the same. To be fair, our away support is unbelievable all the way through the season, but to get that many on a Friday night, especially down in London, it’s just fantastic.

“This is what our fans do and we really appreciate the support they give us up and down the country. It’s up to us now to go down there and put in the right type of performance.”

With four points from a possible six leading into the meeting at Champion Hill, he said: “Confidence is high because we’ve had two good results. We were good in the second half against Orient and we took that into the weekend against Macclesfield. The three points lifted the place, it lifted the dressing room and it’s set things up nicely for the weekend.

“It’s possible that confidence was affected with the run we were on, but not too much. You could see we were waiting for something to happen in games instead of going out and making it happen ourselves.

“We probably did that in the first half against Orient where we waited for something and we ended up going behind. It was the same against Macclesfield, but we sparked into life after both of the goals we conceded in those games. That’s why it was important to go on and get the win.

“It’s very encouraging that we’ve come from behind in the last two games to get points. Thinking about it, we probably did have a little bit of a dip in confidence, but that’s just natural with the results.

“I think there’s good character in the dressing room and with a young team out on the pitch, for them to show that amount of character when, rightly so, there were a few moans and groans from the crowd, to turn it round and come back was very impressive.

“We’re just as frustrated as the supporters and everybody listening at home. It’s tough when you’re not winning games and not picking up points, everybody is going to be jumping down each other’s throats, you expect that as a player. It’s another part of the game you’ve got to handle. The ones who handle it best will perform best on the pitch.

“We had a run last season where it was five games at home last year and we didn’t score a goal. By the end of Christmas nobody remembered that because we were winning every week and we could even have been up to fourth in the table. It’s a bit of a fickle industry at times because people have short memories, and a with a few wins everything is sort of forgotten about, isn’t it.”

As the elder statesman in a very young looking back line on Saturday, he also confirmed that there was plenty of talking for him to do as he made sure his four defenders kept their shape and discipline.

“It is a young defence but that’s great to see,” he said. “Apart from Gethin [Jones] even Jack Iredale is a young lad who hasn’t played many games at this level.

“It’s quite an inexperienced back four so it’s a case of plenty of talking and keeping them organised. I spoke to the gaffer yesterday [Monday] about how well the two centre-backs did and it’s nice to see them taking their chance and looking comfortable with it as well.

“Everybody is obviously talking about Jarrad. Me and a few of the boys who were here last year spoke about him and we said how well he was doing and we talked about the huge potential he had. To see it now come out in the games is fantastic and I think he’s got a massive future in the game.”