Caretaker boss Gavin Skelton gave us his reaction to the Port Vale game shortly after full time on Saturday afternoon. 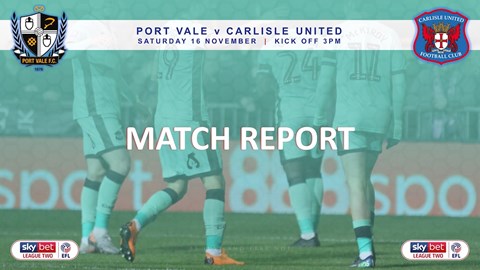 “Lots of positives but we didn’t defend the moments, the crosses, and they were two similar goals at the back post. In terms of the overall game we’ll learn something. In terms of commitment it’s there to see today.”

On the moment that cost the Blues the game, he added: “We need to rectify those, don’t we, going forward. Small margins like that.

“I hope, the commitment from the players, they were really good and deserved that stroke of luck. We didn’t get it, but if they keep working like that I’m sure as a group we’ll get those breaks and results will come with them.

“I’m pleased with the effort they put in, but we need those three points. The supporters at the end, they were right behind us and gave us a big clap off. We’ve got to take something from it.

“We need to keep working hard and make sure results come. We need to make sure we get more and more positive results because that league table doesn’t look pretty. But if we cut the moments out, and be clinical, I’m sure there are three points around the corner.”

The game couldn’t have got off to a better start with a goal from striker Ryan Loft from the first away attack of the 90 minutes.

“You’re delighted to score early, but you do think that’s quite early,” he commented. “For the next 20-25 minutes it affected the game and how we were going to set up.

“I’m delighted for Lofty, that’s five he’s got now, that’s good for him, he’ll take confidence from that. I’d have taken one in the 90th minute as well to be greedy and finish 2-2. He’s been patient, he’s trained well the last couple of weeks so I thought I’d give him an opportunity.

“It was a good run that he’s been working on, getting between the sticks and finishing. I’m sure he’d swap it for three points, but it’s both boxes that we need to be better in. Overall it was a positive performance, lots of energy and commitment, but we didn’t get the result and that’s the disappointing thing.”

On the switch to a 4-4-2 formation, he said: “People get obsessed by formations but they can blend into different ones, depending on how the game goes. With the players we had available, a couple with knocks, I felt that was the best way to go.

“We wanted to go at Port Vale, get our players into attacking areas, and I thought we did that in spells. We had some decent chances, Lofty had one where you’re thinking go on, break the net, but it wasn’t to be our day.

“Like I say, and everyone says it, it’s a cliché, but it’s both boxes. We haven’t defended two balls into the box, and we’ve got to be clinical in their box. If you do that you get results. We’ll keep working hard and make sure that happens.”

And on taking charge of the club he supported as a boy for the first time, he said: “It was a really good atmosphere and our fans were fantastic. It was really loud, a good atmosphere, and I’m just disappointed we couldn’t get a result for them.

“I did feel proud out there but I’d have been even prouder if we could have taken something. It’s not about myself ultimately. It’s about the lads in there and the disappointment that we all feel at the moment.

“It’s a proud moment for my family, my mum and dad were here, but everyone just wanted the result. It’s been a long week, I keep saying it and batting it back … the gaffer, I think really highly of him, and I’m sure there were lots of people who’ve got their CVs in watching the game.

“We’ll go home disappointed, proud of the players’ efforts, and I’ll see my two little boys and my wife tonight. The situation hasn’t changed and I think now is the time where we’ll all breathe and reflect. Whatever is happening with the process it’s the board’s prerogative.”