Caretaker boss Gavin Skelton spoke at his post-match press conference on Saturday night that what can be seen as tough decisions sometimes have to be made when it comes to selecting the match day team. 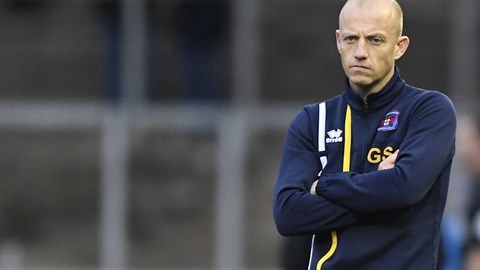 INTERVIEW: We had good chances

Having stepped Jon Mellish up in place of Byron Webster for the Cambridge game, he explained: “You make all of these decisions for the benefit of the team.

“What I will say about Byron is that he’s been fantastic. I spoke to him on Thursday to let him know what I was thinking, and he was excellent. I probably wasn’t his favourite person, because players just want to play, but as a professional he has been absolutely fantastic.

“I hold him in high esteem, and I can’t speak highly enough of him, I really can’t. He’s bound to have been disappointed, but you’ve got to accept it as a player. You never like it and I’ve been through it myself.

“I’ve had that curly finger a few times where I’ve been pulled and told that I wasn’t playing on the Saturday. You don’t like it but it’s all part of being a professional footballer.”

“Jon Mellish came in and I thought he did really well,” he added. “Like I say, you have to make these decisions, and you know that if players are in the team they don’t mind the person who is in charge.

“If a player isn’t in the team, you’re not as popular when you’re the person who made that decision but, again, you expect that because all these lads want is to be playing every week.”

“It’s the same when it comes to the bench,” he commented. “They’re difficult decisions as well and players not involved will feel really disappointed, and rightly so.

“Aaron Hayden has done well in reserve games, and with the 18 names you choose all you can do is pick them on what you feel is best for the team for that game. Obviously that can change as each different opposition comes along.”

With teenager Jarrad Branthwaite holding his place for a ninth consecutive start, he said: “Jarrad should be pleased because he’s not just getting games, he’s showing a great attitude along the way.

“The thing that’s stood out is that he’s kept his feet planted on the ground. It’s good to watch him finish in the dressing room after the game then immediately get on with his jobs along with the other youth team lads.

“That shows us that he’s trying to do it properly and that all he wants is to keep his head down and keep learning, on and off the field.”

“When a young lad comes into a team like this it’s going to cause interest,” he continued. “Jarrad can’t do anything about that, and neither can club, but what he can do is carry on exactly as he has been.

“He’s got a good family behind him and they’re reinforcing our message that it’s all about concentrating on what he has to do. As far as we’re concerned he has a great future with us, but it’s up to him to keep listening, learning and pushing on.”