Cumberland Cup holders Carlisle United were up against Northbank FC at Frenchfield Park on Tuesday night in the second round of this season's competition.

The game started at a fast pace with the Blues winning a series of set pieces, with Charters in charge of putting the corners and free kicks into the mix.

Solid defending from Northbank kept the Blues at bay, and clear cut chances were at a premium through the opening 15 minutes.

Northbank had loud appeals for a penalty turned down when the ball struck a hand inside the area, as they started to grow in confidence, and they had another half sight of goal when a deep free kick was met by McKenna as he jumped high. His header was on target but Robinson was comfortable as he made the save.

Carlisle found space on the left wing when Bell and Soper combined, and a reverse pass inside the box left Armstrong with a choice to make. He went for a first time volley but it was a tight angle and he could only find the side netting.

An excellent run from Birch took him into a crossing position as United started to probe more and more. A great delivery followed but Soper got his bearings wrong as he tried to guide the header into the bottom corner.

A good spell of pressure followed for the away side and their efforts earned them a free kick, 35-yards out, which Blair sent high to the back stick. Atkinson got his head to it and Matt Coombe was on hand to touch it home as it bounced its way across the six-yard box.

Northbank kept things tight after the goal, but Carlisle twice went close in time added on for the half when Charters put good corners into the mix. A flick from Armstrong off the first was volleyed by Day, but Wiser got a thigh to it to send it over the bar.

The second delivery was met on the run, again by Day, but he couldn't keep his effort down and it sailed over the target.

Carlisle had defending to do immediately after the break as the dangerous Kieran Blair took charge of a 19-yard free kick. His shot beat the wall but Robinson was up acrobatically to tip it over the bar.

Another wicked set piece followed for Northbank, this time from Scott, and Day did well to hook it behind before Atkinson could finish it off at close range.

United needed a spark and Armstrong tried to provide it as he raced towards the penalty area. He pulled the trigger but his shot angled high and wide.

Northbank caused more problems when two flicked passes released Blair inside the box. He had his back to goal, but a quick spin brought a searing shot. Robinson did well to throw out a leg and complete another fine save.

Carlisle battled to make things happen in the final third, and a shot from Henderson had Skelton scampering until he saw that it was heading wide.

The Blues missed two great opportunities to equalise midway through the half when Bell was played through to go one-on-one with Skelton. The keeper won the battle and a follow up header was cleared off the line.

It was a short-lived reprieve for the away side though as the Blues were awarded a penalty when a Charters shot was stopped by a wayward hand. Taylor Charters placed the ball and left the keeper with no chance as he thundered it into the top corner.

Northbank tried to bite back with another slick move which sent Blair clear. His low shot hit a Carlisle heel and fizzed past the post.

With no further clear cut chances it was off to penalties to decide the winner.

Barnes - smashes it against the crossbar - CUFC 2-2 NFC 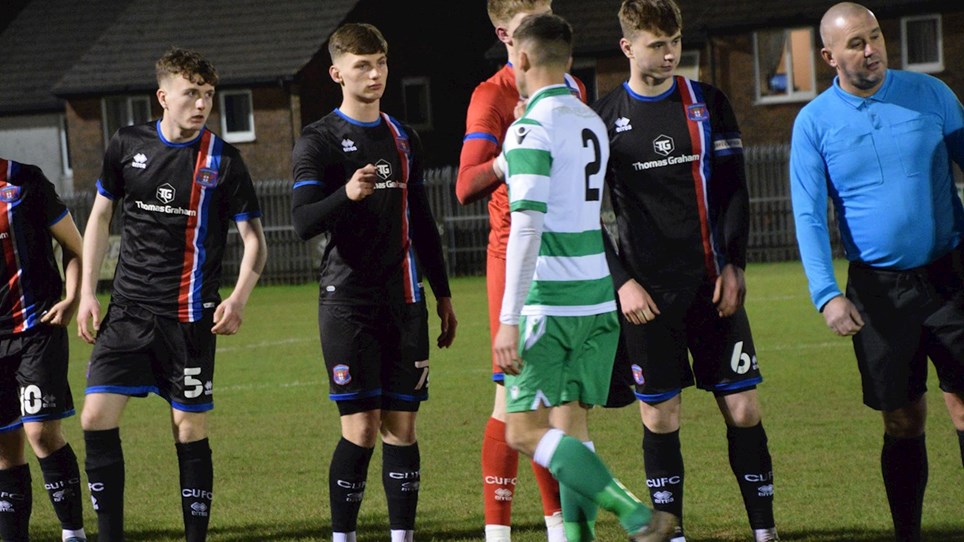