United boss Steven Pressley brought us up to date with the current injury situation at his Thursday morning press conference. 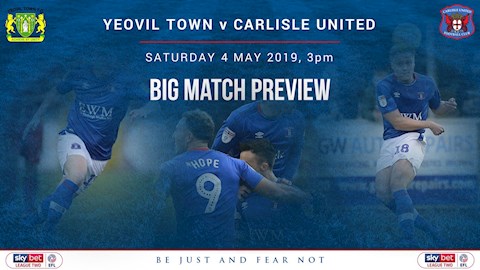 BIG MATCH PREVIEW: A long away trip to round things off

“Kelvin [Etuhu] is long-term and Danny [Grainger] will be missing, but Jamie Devitt will attempt training today,” he explained. “We don’t know how that will be for him, but he’s showing us once again that he has a real determination to play a part.

“With us going into what could be the final game of the season he could avoid all risk to ensure that has hamstring would be fine going forward. He doesn’t want to do that, so he’s going to train in attempt to make it for the weekend. We’re delighted with him for doing that for us.

“The risk we’ll take with him, if we do use him, will be a calculated risk. I would never push any player to play if he didn’t feel he could do what we’re asking him to do. It’ll be entirely up to Jamie to declare himself fit, or otherwise.

“Jarrad Branthwaite missed the Cumberland Cup final on Tuesday with illness, and we’re waiting to see how he is. The good news is that Callum O’Hare is back after coming off with concussion last week. He’s going to be fine.”

With preparations ramping up towards the weekend, he told us: “We were in Monday and Tuesday and we trained very well. The attitude has been first class and I don’t think I need to say anything at all about the importance of doing our jobs right to the lads.

“They are intelligent enough to realise what’s at stake, and that in itself should be a clear motivation.”

And with one eye also on next season, regardless of the outcome on Saturday, he revealed that steps had already been taken as he looks to reshape the squad.

“We’ve done a lot of planning,” he commented. “I said last week that we weren’t going to speak to the players until after the final game, but I spoke with David [Holdsworth] at the tail end of last week, because of pressures we were getting from certain agents and offers that players have received from other clubs.

“He felt he needed to initiate talks with certain individuals, so he’s started that process. I will speak to all of the players once we know our destiny, and that isn’t always a nice conversation to have. I’m very clear on who I would want to retain from the existing group, and hopefully that will all come together for us.

“On the other side of it we’re already speaking and meeting with individuals, I’ve actually met several players already, as we plan to make sure we have the right personnel at this football club for next season.

“The players I’m speaking to are people I believe could do a job in League One or League Two. We’re targeting certain types of players and we’re encouraged by what we’ve already done.”

“We’ve been scouting a lot, north and south of the border, with people who do that kind of work for us, and also as staff by getting out and going to games,” he continued. “We have clear targets and we’re working hard towards trying to get them here.

“Valued players always have a number of options and all we can do is try to persuade them that this is the right next move for their career.

“Ideally we’ll get it done sooner rather than later, because the fitness of the group is hugely important. Pre-season is an enormous time for a manager because you’re not only preparing the players from a fitness perspective, it’s mental and tactical preparation as well.

“That’s why it’s a crucial time and why, if it’s possible, you want as much of your squad together as you can get so that you can all start the journey together. Obviously loan players tend to come later, that’s unavoidable, but you usually work at getting your permanent signings done so that they’re ready to go from day one.”


Our Goal of the Season poll saw almost 2,000 of you vote for your favourite net-buster from the 2020/21 season, and Jon Mellish just pipped Omari Patrick and Ozzy Zanzala to the award.