In the second part of our interview with director of football David Holdsworth he spoke first about the situation with contracted and offered players as moves to add new faces to the squad continue. 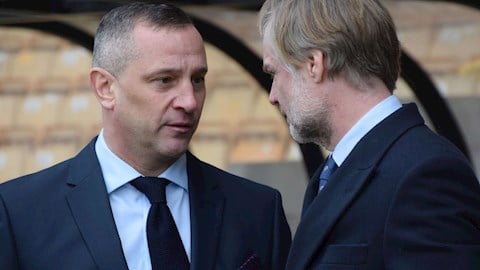 INTERVIEW: I based it on facts and a lot of evidence

“We have Hallam Hope, Kelvin Etuhu, Adam Collin and Macaulay Gillesphey, along with the four young lads, who are contracted for next season and who give us a base to work from,” he commented. “Steven has also looked to progress contract talks with others who he feels could be part of his squad going forward.

“That will be reflected in the answers they give us, and we’re waiting on one or two of those. We’re probably sure on one or two as well, but we’ll be positive whatever the outcomes are on that.

“The thing with all of those players is that we do have a barrier and a limit that we can go to. We understand that there are other clubs who may value them and who may have a bigger pot of money.

“The key aspect for those boys is that they’re wanted here. As with Jamie Devitt, Steven has openly said that he would build a team around Jamie, so you can’t get much more wanted than that. If Jamie decides to move on then we’ll respect it, that’s no problem.

“He’s done well for the club, he’s had probably what I would say is his best season here, and that’s come about because he’s been welcomed and loved here by the staff and supporters. You don’t always get that when you go to another club.

“In terms of adding to the group, agents are prowling and looking for opportunities, and there are a number of good players out there who Steven has recognised and who we have been looking at over the last two or three months.

“It can be an exciting time for a manager, and I think he is excited by it. It’ll be his squad with his dynamic and profile, and that will be reflected in the type of football we play.”

With Jarrad Branthwaite, Josh Dixon, Keighran Kerr and Liam McCarron poised to start their first pre-season campaigns as part of the first team squad, he told us: “One of the first things I said when I came through the door and spoke to the board was that we were keen to establish a pathway for young players.

“That’s been shown in the way I’ve dealt with things by giving these boys three-year contracts. That’s progression for our club, but we only do it with young boys who have the right mentality.

“We needed to bridge the gap from the youth team to the first team and pre-season will be key to that. I already know Steven’s plans for June and July, and he’s working alongside his staff to make it a good programme.

“We’ve just retained Dave Waldie, which is a big part of our club going forward, and he’s demonstrated great skills working beside Neil Dalton in the medical department. The new players who come here are going to have a very tough and demanding pre-season in a schedule that will be significantly different to many others.”

And on creating an identity the supporters can identify with, he said: “As we’ve spoken about a few times, players who do stay or come to this club need to have the right kind of respect and mentality for what we are.

“If people want to move on, that’s fine, it just means we’ll work tirelessly to get the right personnel to replace them.

“All five of the lads offered new deals are well respected by us. If they do decide to move on – and that can be for many reasons, such as location, family, or even for an offer that’s bigger than ours – we’ll do our homework and housekeeping accordingly and we’ll bring other players in.

“We have a structure which we’ll stick to, in terms of finance, and we won’t go above that. We won’t hang this club out ever again, that won’t be happening. We’ll work within our means.

“In terms of profiling, we’re changing the dynamic of the way we play, and that’s down to Steven’s demands. Each position will have personnel who can fit the role, and it will also be based on facts from what we’ve seen this season and last season.

“We’re not just looking at the way we played our football, but also at who went up last year and who went up this year, and how they did it. There are many factors within that, so we’ve looked at younger players and those who have a bit of experience behind them.

“Steven likes working with younger individuals because, as he says, they’ve got legs. That’s one thing we need to bring into our club if we want to play a certain way. We must have those legs in the right positions.”

“We won’t be apologetic about the fact we don’t have the biggest budget, but we are very good in terms of design,” he told us. “Our design will be based on what we have and what we’re able to utilise, and we’ll be very economic and careful.

“In terms of recruitment, if it’s a no from everybody who has been offered then it’s a no. We have a plan B, and I think it’s vitally important to have that for most situations.”

In the final part of our interview David talks more about working with agents, lessons learned, squad size and spending money wisely.