Sheffield United midfielder Regan Slater more than cut his teeth in league football last season as he made 41 appearances for the Blues during a season-long loan spell which also saw him bag two spectacular goals.

The 19-year-old slotted into the Brunton Park dressing room like a duck to water as he became a regular in a side that was pushing for a play-off place for the bulk of the campaign.

Speaking about his time in the north-west, he told us: “It was my first full season of men’s football and I thought it was great.

“It was good to be playing in a team where the results matter. Everyone has different reasons for wanting to play well, I was obviously there to better myself as a player and grow as a person, but you’ve got lads with families and bills to pay, so it was good to see these different perspectives as such a young lad.

“It was good to be around profesisonals, especially on game days, because you can see how people cope in certain situations and that helps you to learn, particularly from the senior players."

“I made over 40 appearances in the end, which was great for me," he added. "When I first came out on loan, I got told that if I made 20 appearances that would be a good loan move, so to double that was something I was really pleased with.

"It was nice to get my first two league goals as well, even though I definitely should have got a few more! There’s no better feeling than scoring.

"I think my favourite was the first one, even though the second was probably a better finish. It was obviously my first ever goal, and I always wanted to do a knee slide, which I got to do after the first one had hit the back of the net.

"Like I said, I should have had a few more. With the way we played it allowed me to get forward and join in with attacks, which was what the gaffer wanted from me."

Having worked his way into the reckoning for a start almost every week, he commented: “To become a regular starter at such a young age was very good for me.

"There were times at the start of the season where I was wondering whether my name was going to be on the team sheet, but when you come into a Saturday knowing you’re going to be playing it's a great feeling. It’s a relief as well, when you know, because you can prepare properly and you know what’s happening."

“We obviously had a change of manager halfway through the season, which I found very strange, because that’s the first time that has ever happened in my career," he admitted. "The way it happened was a bit strange as well, because we were in a great position.

"I got on with both managers, so it didn’t really affect me in terms of playing and how much I was enjoying training and things like that. It was a really good group of lads, and all of the players we had all fitted in really well."

Looking back at what the move has done for him, he said: “I do feel like I’ve learned a lot as a person. I couldn’t be bothered driving three hours home every day, so I was staying up in the houses a lot.

"When you do that you end up doing things for yourself and you’re basically having to look after yourself, which helped me grow up. I think my mum is a bit disappointed though, because I haven’t brought back anything I learned, and she’s back to cooking my tea and doing my washing for me again now!" 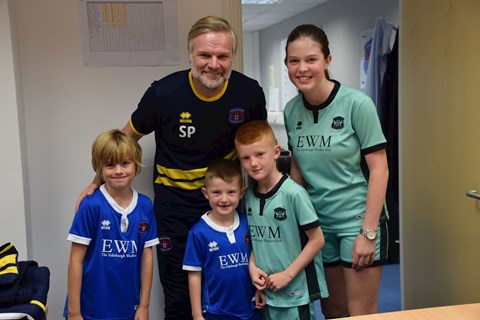 So, does he leave the club with good memories?

“The club will always be a big part of my career, whatever happens, because it’s where I started," he confirmed. "It’s where my career has taken off so I need to make sure I kick on from here now. It’s a club I’ll always remember, and I’ll always be very grateful for the opportunity I got at Carlisle.

“You never know what might happen next season. I obviously need to find out what Sheffield United’s plans are for me, but I would definitely come back if the opportunity came up.

"I don’t want to go back and play development football again, I want to progress my career in the men’s game. My aim is to play as high as I can, so that’s what I’ll be looking to do next year.

“I’ve obviously came back to a Premier League club and the promotion the lads here at Brammall Lane have gained is a great achievement. That was what they were aiming for, so for them to do it is amazing. I’m a fan as well so it means a little bit more."

His final words were, of course, for the fans.

“The Carlisle fans were amazing with me throughout my time up there so I need to say a massive thank you to them," he said. "The away following we take everywhere is amazing, especially when no game is close.

"The home and away fans were absolutely top drawer.”