We caught up with Aston Villa midfielder Callum O'Hare on Friday afternoon, shortly after he had been announced as the winner of the PFA April Player of the Month Award, to get his thoughts on his loan spell at Brunton Park. 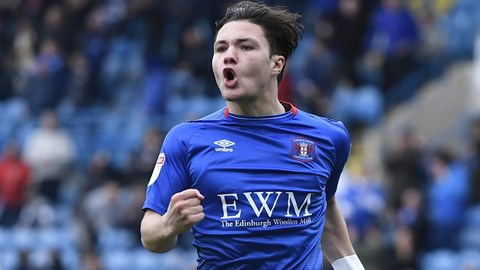 The all-action midfielder became a favourite with the fans as he combined an attacking approach with determination and flair, and three goals in 16 appearances made it an excellent first ever loan spell away from his parent club.

“It’s been a really enjoyable few months,” he said. “I came in to get game time in a first team environment and to be involved in a professional dressing room, and that’s what happened.

"On top of that I thought I played well, and I scored a few goals and got a few assists, so it’s been a really enjoyable spell for me.

“I definitely feel like I’ve learned a lot. When I was playing U23 games they don’t really mean anything, they’re all about progression on a personal level rather than playing in a team which is trying to win points every week.

"In League Two you have to win every game, and every game means something to a lot of people. Playing in proper stadiums in front of a lot of fans really helps you.

“I’ve learned a lot about myself because I’ve been staying in a hotel while I’ve been up there. I’ve learned to enjoy my own company and things like that, which I think has been important for me."

And having built up such a strong bond with the Carlisle fans over his four-month stay, he told us: “The fans have been brilliant with me and I’ve loved having that relationship with them.

"They’re the ones that pay their money to come and cheer us on at games, so I always wanted to play well for them to repay their support. It's just been amazing, it really has.

"I've had so many positive comments on social media that it really does make you step back and realise that you have to try as hard as you can for the people who come to watch you."

As for the highlights form his time with United, he commented: “I think the highlight for me has got to be scoring my first professional goal.

"It meant a lot to me, and you always remember your first goal, so I’ll always remember my time here really fondly. My first one has got to be my favourite of the three I scored.

"I took a nice neat touch when it fell to me in the box then I drilled it through the keeper’s legs and, like I say, it was even more special with it being my first goal."

“The real disappointment was that we didn’t manage to sneak into those play-off places at the end of the season," he admitted. "I did everything to try and help get us in there, but it just didn’t work out in the end. We’re sorry to the fans that we couldn’t quite do it.

“Driving back home on Monday after our meetings with the gaffer didn’t feel that strange, but now that I’ve been back for a couple of days it does feel weird. I’m not sure what will happen next season yet, I’ll go back to Villa and see what gets said there before I look at what I’ll do next season.

"Villa are obviously in the play-offs so it would be great for them to go up, and I’m back training with them now. It would be nice for them to get the job done and get back into the Premier League - which is where they belong."

"I think I’ve played just over three months and won Player of the Month in one of them, so I’m really pleased with that. For it to be the last full month of my loan spell is a really nice feeling.

“It does make it extra special that it’s an award that the fans vote for. I think a few Villa fans as well as Carlisle fans voted for me through the messages I was getting on Twitter, and it’s a really nice feeling to know that fans have taken time out of their day to vote for me in something like that. It’s something I really appreciate.

“I’d really like to thank all the fans and everyone around the club and the city for everything they've done throughout my time at Carlisle. Everyone has been a massive help to me. They’ve really helped me in my career and that’s something I’ll always be grateful for, whatever happens next season.”