In a three-part interview, which will run on the official website over the next few days, director of football David Holdsworth covers a wide range of subjects as the club pushes on with preparations for next season on and off the field. 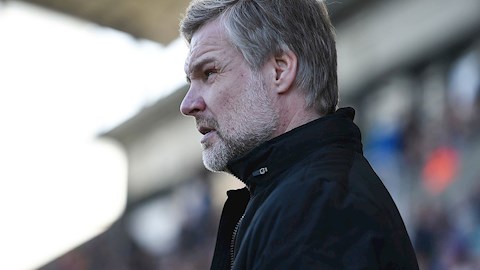 MANAGER: Based on what I want to do going forward

In part one, conducted on Tuesday afternoon just after the announcement of left back Jack Iredale as Steven Pressley’s first summer signing, he talks about the retained list, the manager’s role and position, and the impact injuries had as we got into the second half of last season.

Speaking first about the search for new players, he said: “We’ve been working tirelessly all year and, whilst the season has finished, there’s been a lot going on behind the scenes, and that’s coming to fruition for us now.

“The next step is to continue that work through the summer. A lot of profiling has been done, in terms of where we want to be, and that’s been done with Steven [Pressley] and the rest of the staff. The key to moving forward is that you have a plan, and that’s certainly what we’ve got.”

“Steven had the responsibility of speaking to the players, and of making the decisions for his retained list,” he added. “It isn’t an easy position for a manager to be in when he’s releasing people.

“We fully respect that we’ve had some good professionals here, and they’re very good lads as well, so it was tough for Steven because, in some cases, you’re releasing people who you see every day.

“Believe me, that dressing room was a very good dressing room with some very good characters in it, but the harsh reality of football is that you do get ups and downs and those players will now reflect on where they see their futures. We wish everybody who has left us the very, very best because they’ve been a big part of the club.

“We’re now in the same position as every other club where we have to identify and try to bring new players through who will hopefully take us on a different path.”

“The key to all of this is that the manager decides which players he wants, there’s no doubt about that,” he commented. “Steven isn’t told who he can or can’t have. He’s reflected on who he wanted to keep, and he made the decisions accordingly.

“We gave him the responsibility of being manager of this football club based on what he saw as his blueprint to take the club forward. The board and I do want continuity at this club, as much as we can have it in a world of football which is sometimes very fragile, and we also want stability.

“I sat down with Steven and we went into depth about all of his plans, certainly those on the pitch, and we’re delighted that he’s staying for another season with us. I enjoy working with him and his responsibility now is to bring in those players who will give us the chemistry to progress and hopefully have a good season next season.”

“The decision to keep him as our manager was never going to be about whether we made the play-offs or not,” he confirmed. “I based it on facts and on a lot of evidence.

“We had a relatively small squad last season and when we were hit with a number of injuries, as we were a few times, it wasn’t a reflection on Steven or his management. It was a reflection on the fact that our squad didn’t have sufficient depth, and that’s down to many aspects.

“When five or six players are out of anybody’s squad it really does tell, but we had to try to manage those situations, and we hope people can see that. It showed when we went to places like Stevenage and Tranmere – we really struggled to cope.

“Once we got the boys fit and back on the training ground, and I have to say that our physio worked wonders on that, it was a different story for us. The players wore the shirt with pride and the fans responded.

“We played Bury with 10 men, and we beat them, and we showed the characteristics the Cumbrians and Carlisle supporters want to see. We had the squad, but when it was hit with the demands of the season it was a tough place to be.

“You couldn’t always judge the manager on that and, having been there myself and also having been a player, you know that some games are going to be harder than others. One thing I can say is that the players gave everything, and we fully respect that.”

“We honestly feel Steven is the right man, but I had the task of looking for another plan if we decided otherwise,” he said. “Ultimately we were looking at that with our shades on.

“We like Steven, we have a good format of working with him and, as I say, it was a decision we made based on facts.

“The hard evidence was there every week for me of seeing Steven’s plan going into matches and seeing how methodical he is. The biggest thing for me is that he really bought into Carlisle.

“When I’m here, he’s here, and he’s barely away from the club. He likes being in and around the city and that’s a really big thing.”

In the second part of the interview David Holdsworth talks about working with agents, waiting for responses to contract offers made, recruiting the right type of player going forward and an initial discussion on budgets, which will be followed up in part three.