Keeper Louis Gray put pen-to-paper on his new season long deal last week and immediately spoke about how much he was looking forward to continuing the good work already done in the goalkeeping department as he looks ahead to teaming up with Craig Wight and Adam Collin one again for the new campaign. 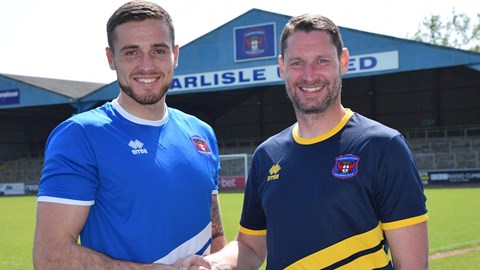 CONTRACT: Keeper stays at Brunton Park for another season

“I’m just glad it’s all done and sorted, to be honest,” he said. “I was happy here, I didn’t feel the need to change anything, so it’s good that it’s done.

“I knew I was getting an offer a while ago, so it was just a case of getting it over the line. Now it’s sorted it’s all about kicking on for next season.

“The manager told me that he was really keen on me staying because he’s been very impressed with what he’s seen since he came here. He likes my work rate and the way I do things and I like working with him as well.

“I also get on really well with Craig, our coach, which makes things easier. Me and him just clicked from day one. He’s helped me a lot, to be fair, so I sort of owed it to him to stay as well.

“I think we’ve started something and I just want us to keep going on that journey. Along with Adam, all three of us have different ideas and I think that means we end up helping and learning from each other.”

And on the length of the deal agreed, he told us: “I think you accept that lower down the leagues you’re looking at one-year deals, but you really just want it done and signed as soon as you can. The nice thing is knowing that the club wants you to stay in the first place.

“There wasn’t much in the way of pitch time for me last season, but I think it says a lot that they’ve made me an offer anyway. That shows that people appreciate how hard I work and that’s important on a personal level.”

On having to wait for a chance to take to the field, he said: “It’s a completely different position to others because you go into a season knowing that only one person can play.

“Adam was in there when I arrived at the club and he did really well. We saw that with him winning numerous player of the season awards, so there wasn’t really anything I could do other than be ready if the chance was to come.

“I’ve always had a hunger and desire to play, that won’t change, and that’s why I’ll keep pushing Adam as hard as I can. Everyone at the club knows exactly what I’m about and both Adam and I know that we have to be on our game every single day or the one who isn’t starting will be there and ready to take over.

“We get on really well and I’ve supported him because I want him to do well every week. I know that’ll be the case if I’m the one starting as well. It’s a great relationship and we work each other hard in training. I know I’ve pushed him hard all the way this season, which has helped his performances, and hopefully that will continue next year.

“Obviously it’ll be a new look squad and the gaffer has talked about the way he wants to see us play. It’s going to be very fitness based so I think we’ll see players who can handle that side of it coming through the door.”

Click HERE to watch an interview with Louis Gray on iFollow United now.