United boss Steven Pressley spoke to us about what he expects to be a tough encounter when in-form Swindon Town come to Brunton Park at the weekend. 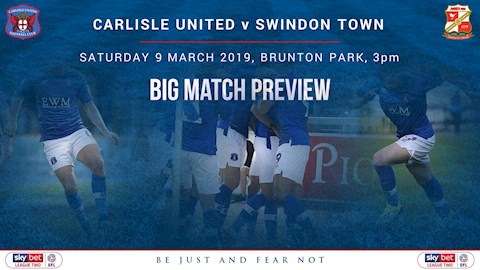 BIG MATCH PREVIEW: The Robins are at Brunton Park on Saturday

“Saturday will be a terrific game against a Swindon side who are playing very well,” he said. “It’s one that we’re looking forward to, we’ve had a good week of training, we think we’ve prepared properly, and hopefully the evidence of that will be there on Saturday.

“In terms of what we’ll face, they have good mobility in their front players, that’s for certain. There’s good speed in there and they can be very effective on the counter-attack. They’re very much a passing team, so they can test you in a number of ways.

“They’re in a rich vein of form at this moment in time and they’ll be coming here in a confident mood. It’s going to be a really interesting game and the big thing for us is to continue to concentrate on improving ourselves. We know we’ve had a couple of wobbles of late but we’re in a great position and we mustn’t lose sight of that.”

“Whilst giving them all respect, the most important thing is us at this moment in time,” he continued. “We have to win games of football so we’re at the point where we need to stop talking about what could have happened in games and turn it into victories and three points.

“The fact is we haven’t picked up enough points in the last four games, and that has to change, because there is still so much to play for. We’ve got 11 games to go and we have to look at them as 11 cup finals.

“We’re a point off the play-off places and our objective has never changed. We must ensure that we’re in there come the end of the season and our home games are certainly pivotal to that.

“I’m pretty certain that at the start of the season if you’d said to many of our supporters and people connected with the club that we’d be in this situation at the start of March they’d have settled for that.

“We know the recent form hasn’t been good enough and we haven’t picked up enough points from the last four or five games which has meant we’ve slipped down the table. We’re desperate to get back in amongst it, but there are still 11 games left and we still have a great opportunity to achieve our goals this season. To do that, it’s vital we get back to winning ways very quickly.” 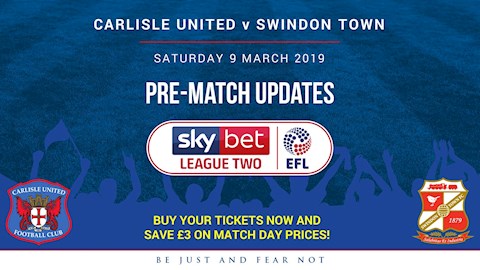 PRE-MATCH UPDATE: Handy tips ahead of the weekend game

As to what is being worked on to help to achieve that aim, he commented: “The one thing I’ve noticed about us in recent weeks is that we don’t have the ability to counter-attack with the same speed we had when we had the likes of Nadesan and Yates.

“We brought in Nathan Thomas and hoped he’d be a perfect replacement, but it’s taken him time to settle. If your wide strikers have speed you can play the type of football you want to see, but we’ve said before that Nathan hasn’t quite found that form as yet. I spoke to him today [Thursday] and he’s still trying to get to those levels, and I’m sure he will.

“With the different attributes different players bring to the table it means we have to find a different way to score goals, which will be through intricate play from our players who can open people up.

“We have to find a different way in our build up and in our goals, and that’s something we’ve worked on in training and, again, we hope it will be evident in our performance on Saturday.

“We had a way of playing which was successful, but we maybe haven’t quite got the players to do that at this moment in time. Mark Cullen is a very good striker, but he isn’t blessed with blistering speed, and that means we have to find another way.

“Every manager and fan would have an ideal way of playing the game, but you have to play to the strengths of your squad. It’s that different style of play that we’re building now. I have a real confidence in this group, I like these players, and I’m sure we’ll get back to winning ways quickly with what they can do for us.”

The only addition to the treatment room alongside Macaulay Gillesphey and Arthur Gnahoua this week was Liam McCarron, who picked up a knock to his knee during the first half of the Middlesbrough game on Tuesday afternoon.

“Liam will go for a scan which will give us a much better indication of how long he’ll be out,” he explained. “It’s disappointing because he’s a great young player. Other than that we have a fully fit squad.

“We’re in a period where, in my opinion, our younger players have been our best performers and I need more from the senior group. Pressure always comes at this stage of the season because there’s a degree of expectation, and this is the time you need your experienced players to stand up.

“The fans are vital, of course they are, but the performance to get the fans onside is equally as important. I spoke to the group on Monday and one of the things I said was that the senior players need to take more responsibility and do better. They need to be the ones driving us.”