With United looking to get back to winning ways following the weekend defeat at Rodney Parade manager Steven Pressley spoke about the important preparations for what will be another tough encounter with Swindon. 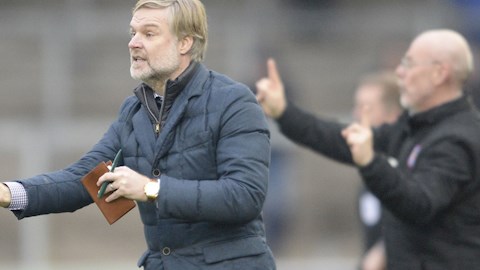 MANAGER: We're frustrated with the way we conceded

“We’ll analyse and we’ll prepare for the weekend because I know the players want to get this right,” he said. “I don’t think confidence is an issue at all within that dressing room.

“It’s just a case of us tidying things up so that we give ourselves a platform. If we look at Saturday, we had some really good periods of possession, so that tells me the confidence and belief is there, and that’s important.”

“If we’re looking for people to get us going out there on the pitch, I thought our younger players were our best players in the game at Newport,” he told us. “They played with great energy and tenacity and they showed good composure on what was a difficult pitch.

“The three in the middle of the park showed real purpose, but the fact is we’ve nothing to show for it. Ultimately this game is about winning and picking up points, and we must keep that in mind.”

On lessons learned from what was a difficult game at Rodney Parade, he commented: “Newport are a big, physical team and they play to their strengths.

“We’ve seen what we do to other teams when we play to our strengths, and I want to see more of that. If we show courage and play our game our way then I think we always look like scoring goals.

“Like I say, Saturday was a day when our younger players were most effective for us. I thought Regan Slater was outstanding and Callum O’Hare never stopped chasing.

“Regan had his best game for the club since I came here. He won a lot of second balls, he controlled the game for us, at times, and he wanted to be involved.

“Ultimately the game was decided by us not dealing with first contact. Our more experienced players didn’t deal with the direct football they faced. When the ball was turned over, and it came back at us, we missed making that initial contact too often.”

“The consolation we got from Saturday was that we’re still only a point away from the top seven,” he told us. “However, and we all know this, if we really do want to be involved in the promotion chase then we have to start picking up points.

“When you’re one point outside the play-offs with 11 games to go the race is still massively on. But, as we keep saying, we know we have to turn things round and get the momentum back to where it was just a few weeks ago.

“We have 11 huge games, call them cup finals if you want to, between now and the end of the season. We have to win as many of them as we possibly can to try to achieve our goal, which is promotion, and that goal won’t change.”


To say that the start to 2021 has been unusual would be, well, somewhat of an understatement with a combination of the weather, Covid and more weather meaning that the Blues haven’t taken to the field...


The next batch of Golden Goal match day draw tickets are now on sale and we are very close to another sell-out already, so don’t miss out!


To say that the start to 2021 has been unusual would be, well, somewhat of an understatement with a combination of the weather, Covid and more weather meaning that the Blues haven’t taken to the field...


Carlisle United can confirm that defender Max Hunt has made his move to National League side Yeovil Town a permanent one following a successful initial one-month loan stay.