United boss Steven Pressley gave us his reaction to the away draw at the New Lawn shortly after full time on Saturday. 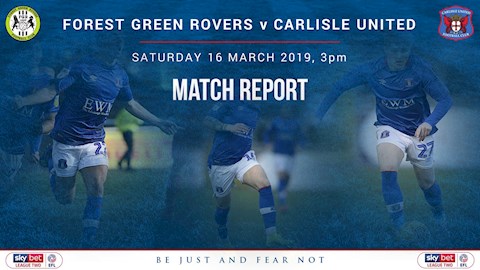 “I thought the players were excellent, and I’ve just told them that in the dressing room,” he said. “I think that was our best performance since I came to the club.

“We were really controlled in and out of possession and we dominated possession against a side which has the best passing and ball retention stats in the division. Without a shadow it was our most dominant and professional performance and the players deserve enormous credit for doing that for us.”

Having asked for a response to a disappointing midweek display at home to Notts County he admitted to being delighted with the mental toughness shown by his charges.

“We’d gone from winning against Swindon and getting back into the play-offs to the huge disappointment of a really poor performance against Notts County,” he told us. “To then have to face a good team like Forest Green is a real test of your character, make no mistake

“The players responded to what we’d asked of them and they were immense. I understand that this game is about winning, but I also have to look at the performance and how we played.

“You want to see improvements all the time, and that’s definitely the case at the moment because I felt in the last couple of games that we’d gone away from the controlled performances I’d seen when I first got here.

“It’s a game we should take confidence from because there were a lot of good qualities on show. Like I say, it was our best performance by a long way since I’ve come here.

“It was particularly good for me to see the players doing the things we’ve talked about in training out on the pitch. We can talk about game plans, but it’s up to the players to take pride in what they’re doing. They have to deliver on a Saturday, and they certainly did that for us this weekend.

“We returned to doing the things we’re good at and we were excellent in the way we worked hard for each other. We’re a team that’s suited to a mid-press and we adopted that in this game. That meant a team that likes to pass wasn’t able to get the ball behind or through us and we have a number of really good steals from that position.”

Having gone behind against the run of play in the first half the players could have been excused had they suffered a crisis of confidence, particularly in light of the disappointing midweek display.

“When that happens you do get the feeling that nothing is going right for you and you have to have a certain type of mentality to get past that,” the manager said. “When you come in a goal down and they’ve scored off what was their only opportunity of the half, and you’ve played so well, it is hard to take.

“It’s testament to the players that they came out and reacted in the way they did. We’re not on the best of runs at this moment in time so it can be difficult mentally if you go behind when you’ve been really, really dominant.

“The players didn’t deviate from the way they’d been playing and overall it became a performance that was reminiscent of the fast, attacking football which has been so good for the club this season.”

And with a total of 22 shots from the visitors – 11 of which were on target – he also admitted to being disappointed that the away score tally hadn’t registered a bigger number.

“The disappointing aspect was that we probably had six or seven clear cut chances in the course of the 90 minutes,” he commented. “They weren’t half chances, they were clear cut, so it is disappointing for us to have only drawn the game.

“Unfortunately we didn’t capitalise on the great opportunities we created but I thought the players really stood up to the game well. They imposed themselves and I was pleased for them, because I know they were unhappy with what they’d done on Tuesday night as well.”

On the unexpected absence of midfielder Kelvin Etuhu, he explained: “I know how important football is to everybody, but you sometimes have to realise that the most important people in your life are your family.

“We’re delighted for Kelvin, his partner gave birth to their first child and he tells me that his little boy is a good-looking boy, just like his father. I just hope everything goes well with his family.

“The interesting thing is that we were also without Jamie Devitt in the lead up to the weekend. He was away with a family issue as well, so we had a couple of teething problems early in the game because we’d worked on certain aspects during the week, and he wasn’t with us to go through it.

“It took the first five minutes or so to really sort that out, but once he got to grips with what was required we didn’t really look back. We played the game in the way I want us to play it.

I’ve had to look at certain things, and it’s taking time, so we did things slightly differently. I went with a 4-3-1-2 with Nathan and Hallam as slightly wide strikers, and we had Dev in the 10 role, but pushing into the striker position when we were out of possession. I thought it suited our players to play that way.”

On the inclusion of 16-year-old defender Jarrad Branthwaite in the match day squad, he said: “We were at a stage where we had George Glendon out with an illness, and we had no other players available after that.

“Jarrad is a young man we have great belief in and we’ve given him a real experience this weekend.”

And on the near 300 fans who made the journey, he said: “Those that travelled - thank you very much. The pleasing thing is we gave them a good performance.

“They gave the players a great reaction at the end of the game and when you get that you know you’ve done something right.

“When you draw a game the performance can become important psychologically, and I know the players and supporters will be able to take a lot from what they did today.

“It’s a step in the right direction and we want to see more of the same at home next weekend.”