United boss Steven Pressley spoke to us about this weekend’s trip to Rodney Parade as the Blues prepare themselves for a tough game against Newport County. 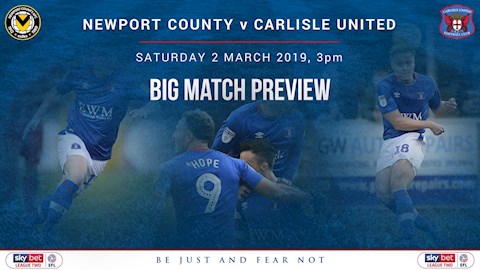 BIG MATCH PREVIEW: We look ahead to the weekend trip to South Wales

“The one thing we know about Newport is that they’re a very good team,” he said. “They’re very strong at home and they look to ask questions of you as much as possible.

“They cross the ball a lot, they get deliveries from all angles, and they don’t ever turn down the opportunity to put you under pressure.”

“We know we have to stop as much of it as we can at source,” he continued. “Games like this aren’t so much about the tactical preparation, it’s the psychological preparation. It’s about being in the right frame of mind and being mentally ready for what they’re going to throw at us.

“If we don’t stand up to that then we’ll never win the game. That means we have to do the basics and then, if we implement our football ability, that will give us more than a chance to get the result we want.”

“They’re a side who have proved themselves to be very capable under the guidance of Michael Flynn and we completely respect that,” he commented. “Their manager is very shrewd and they’re more than capable of putting together a string of results with the way he has them playing.

“They’re very effective at what they do and they will, without doubt, ask questions of every team they come up against. That’s why we’ve spoken to the players about what to expect. We know, as I keep saying, if we do the basics of football right we won’t be going too far wrong.” 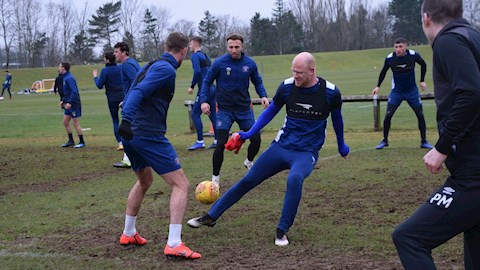 “In terms of selection, everyone has trained well,” he confirmed. “Mark Cullen, Gary Liddle and Danny Grainger all trained fully on Tuesday and Thursday. Jason Kennedy played 60 minutes in the bounce game on Tuesday, so we’re getting there with him as well.

“Stefan Scougall cramped up during the last 10 minutes at the weekend, and Callum O’Hare started to feel it a little bit, but they’re all improving as each day goes by. When you haven’t been playing regular first team football it does take you a while, and that’s why it’s a balancing act when it comes to improving their fitness.

“We want to help them along but we can’t push them too hard or they’ll break. The balancing act for me is to continue to improve the fitness without giving them an overload.”

Having had a run of games where results haven’t matched the level of performance, he said: “There’s a desperation about wanting to win and the group are a terrific group in terms of that. They’re desperate to achieve and give the fans what they want, there’s no doubt about that.

“They have a real feeling for this club and sometimes, when you get in front, the desperation can take over and you lose sight of what you were doing that got you there in the first place.

“We looked back at the Colchester game on Tuesday and it stood out that for the last half hour we adopted a completely different approach to what we’d seen in the first 60 minutes.

“It was almost like all we wanted to do was protect our one-goal lead. You have to try, as a manager, to change that, and we’ve talked a lot about the things we think we can do better if we find ourselves in that situation again. If we can start to manage the desperation that sometimes comes with your desire to win, I think we’ll be a very good team.

“The players are very receptive to the points we’re putting to them and there’s a really good feeling here. We all know there’s a lot of football still to be played. That brings with it teams who go on runs and others who hit sticky patches.

“It’s important we keep our focus through it all and that we don’t show any levels of fear.”

On the trialists who have spent time with the club recently, he said: “Several of them played in the game on Tuesday and afterwards I spoke to them individually to let them know that at this moment in time we couldn’t see the benefits of taking them in.

“We wished them all the best and we move on. We do still have one here at this moment in time, but he didn’t feature in the game. He’s only in for the week, it’s nothing imminent. It certainly isn’t one we would look to do this season. It would be a longer-term view.”

Meanwhile on the appointment of former Royal Air Force Physical Training Instructor David Waldie as the new strength and conditioning coach this week, the boss spoke of his delight at having filled the position so quickly.

“We’re really pleased to have him on board,” he said. “He’s made a good impression on the group and I think he’s going to be a perfect fit.

“He’s a lad of real standards and he has some really good ideas. Continuity is important in a role like that so it’s good to get it done quickly. He’s crucial to the interpretation of the data, the gym work and the prehab, and other aspects like that, so it’s good to have him here with us.”

INTERVIEW: I was in no doubt this was the right place


The wonders of modern technology brought us up close and personal with new arrival Morgan Feeney this week as we managed to catch up with him a day before he was set to meet his new teammates for the...


Striker Cedwyn Scott brought a successful - albeit extended - trial spell to its conclusion this week when he signed a short-term deal which keeps him at the club until the end of the current...

CHARITY LIVE STREAM: I really am lost for words


With Neil Diamond’s ‘Sweet Caroline’ playing in the background an emotional Rhys Bennett brought an end to his 12-hour fundraising marathon tonight with a heartfelt thank you to the hundreds of United...

INTERVIEW: In my opinion he's the complete package


It was a pleasure for us to be able to grab a few minutes with Hebburn Town boss Kevin Bolam this morning as he provided more insight to what we can expect to get from new signing Cedwyn Scott.