United boss Steven Pressley gave us his reaction to the 2-2 draw with Cambridge shortly after full time on Saturday evening. 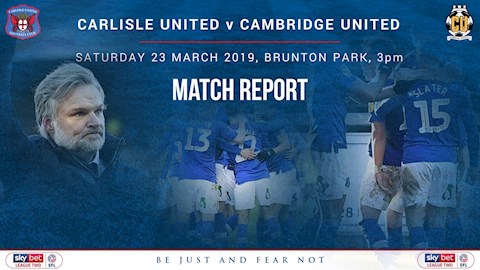 “I have no complaints about the application and effort the players gave me in this game,” he said. “I thought we played some really exciting football and created numerous chances. The big thing is, when you play in that manner, you have to win the game.

“At 2-1 we were very much in control and looking very assured. We just have to tidy up on a couple of the defensive aspects that let us down today. In our general play and when doing the things we work towards, we were excellent. We’re really looking like a good counter-attack team again which is something we’ve been working hard on.”

“I’m really disappointed for the players that we didn’t win the game because it was a good performance, but it obviously isn’t the outcome we wanted. The players couldn’t have given any more today and that’s what you ask for as a manager.

“I ask for that type of brave football as well, where we control the game through our passing and movement, and they delivered that. It came down to the final pass or the final finish letting us down on a number of occasions.

“In the last two games especially we’ve really began to look like a much better threat in front of goal. We’re looking like the team that we were before, and that’s pleasing. The disappointment is that we’ve put so much into the last two games and we’ve only got two draws to show for it. But if you’re talking about performances and improvements, then I’m really seeing that.”

On the goals conceded, he told us: “Adam [Collin] has had a great game and he’s made a couple of big saves. That’s what we’ve come to expect from him. He’s not only a very good keeper, he’s a very good person. He has a good influence around the place because he uses his experience really well.

“I was also pleased with the performance of the team and the type of football we played but, yes, we are very disappointed with the goals we conceded.

“When you concede after three minutes you always look for a response and we certainly got that. To go into half time 2-1 up was pleasing, and we felt we would go on and win the game. We always looked in control and we always looked capable of scoring another.

“To lose the second goal in the manner we did was the disappointing factor. Once they got the free kick we have to get back into our defensive positions quicker. There were a number of players who didn’t move back into the standard defensive positions, and because of that we got caught cold.”

But the United response to the early set back was two great finished from Jamie Devitt and Nathan Thomas.

“We scored two great goals,” he agreed. “Dev’s is a wonderful finish and it was a great bit of play for Nathan’s goal. That’s the type of football we want to see. It was actually a great game, but we’re just disappointed not to come away with the three points.

“Callum [O’Hare] got two assists and I thought he was outstanding. His performance was typical of the kid, and it’s pleasing for him that he’s developing in the manner he is. He’s a player I’ve been going on about for some time. 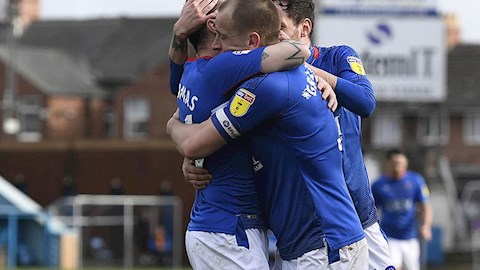 “Along with that I like the formation we’re playing, and I think it suits the players we have at this moment in time. In the last two games, since we’ve adopted that formation, it’s really shown in our performances that it’s something the players are getting to grips with.

“It was a game we went in to feeling it was one we had to win, but that’s the way we approach ever game. You can see that we’re taking a number of calculated risks at the moment in the way we’re setting up, but we’re doing that to create the chances I believe we need to help us to win games.

“That means you can leave yourselves exposed at the back, at times, but it’s the method we feel will get us results, particularly if we keep playing the way we are at the moment.”

On the absence of midfielder Kelvin Etuhu from the match day squad, he explained: “Kelvin has been back in hospital for the majority of the week with his partner and new baby.

“There was a little bit of concern about the baby, but everything now seems fine. I spoke to him last night [Friday] and it was the first time he’d been out of the hospital, but it was a time where he felt he needed to support his partner. We all understand that and he should be back in work next week.

“Peter Grant picked up a slight injury on the astro-turf last week which was worrying, but it’s good news, and if he isn’t back this week he should be back the following week.”