We spoke to goalkeeper Adam Collin ahead of training on Wednesday to get his thoughts on a disappointing defeat against Notts County on Tuesday. 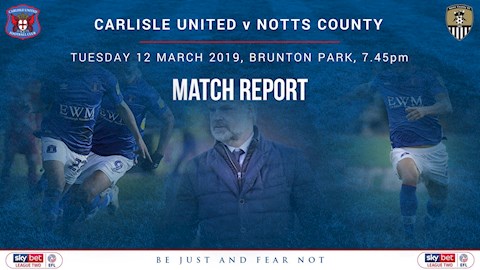 “It was a bad result for us on Tuesday night,” he said. “The performance sort of goes out of the window when the conditions are as they were, and we knew it was going to be nothing other than an absolute battle and grind. We still wanted to get the job done, and we didn’t do that.

“I’ve played here when it’s been windy but nothing like it was on Tuesday. I think it was worse in the first half. The rain died down a little bit in the second half, but the wind was horrific.

"It just spoils the game and they way we wanted to play it, but we needed to alter our game plan and dig in. To be fair to them, they’re scrapping for their lives at the bottom of the league and they did that side of things better than we did."

“We didn’t help our own case in the first half," he admitted. "We gave some stupid free kicks away on the edge of the area, which we had to defend. They were swinging their corners in right on top of me and there were times where the wind would just die as they were coming in and things like that, so it was very tough.

“It doesn’t really matter to me that it’s against a former club, I just get on with it. Their fans were giving me a bit of stick but I don’t mind that, it’s just another game. We’re fighting for the play-offs and they are down the bottom of the league, so that’s all I need to say about that really.

“I thought we actually handled the weather side of it really well so the goal we gave away was a bit of a kick in the teeth because it was just a basic error. It was frustrating to concede a goal like that after we’d stood up to everything they’d thrown at us until that point.

"We know Gaz [Liddle] is a quality player and he’s held his hands up straight away. I spoke to him about it after the game but it’s one of those things, we all make mistakes and it’s unusual for Lids to make an error like that. It happens, and we just have to move on." 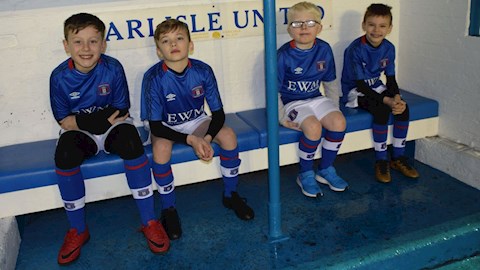 GALLERY: With our mascots on Tuesday night

Having had to deal with some tricky moments thanks to the ferocity of Storm Gareth, he told us: “For the save off the free kick, I did see it late - and I think that came of Lids as well, actually.

"When they come at you that quickly you’ve just got to make a strong save and I managed to do that and get it behind. It’s good to make saves but you don’t want to have to do it too often.

“I was happy with how I played on Tuesday and I’ve been the same for the majority of the season, to be honest. In a game like that you’ve just got to concentrate on being solid and keeping things as simple as possible. When you try and over-complicate it or do something clever that’s when you come unstuck as a goalkeeper, especially in those conditions.

“In the first half I concentrated on my kicking and dealing with the balls they were putting into the box. If I can be solid it gives the team a platform to work from."

The Blues were right back in it with just under 15 minutes to play thanks to a cheeky goal from Hallam Hope which will be talked about for many years to come.

“I get on well with their goalkeeper coach, Mark Crossley, and I had a chat with him about Hallam's goal after the game," he commented. "It’s been a while since I’ve seen something like that happen, but thankfully it’s never happened to me.

"I don’t know if their keeper couldn’t hear the shouts because of the wind, or whatever, but it’s just another one of those things. When I was looking down the pitch I didn’t actually see where Hallam was until he took the ball off the keeper."

“We’ve reflected on the game but we have to put it to bed to make sure we’re prepared for Saturday," he continued. "Our full focus has to be on Forest Green now, and you can put Tuesday to one side to a degree because of the conditions.

"If it was a nice night and we still get beat then I think there would be a few more issues to deal with. We know we should have been able to adapt to the conditions better than we did, but we have to move on.

“We’ll go to Forest Green on Saturday and look to put it right. It will probably be horrible conditions again, with more rain forecast, so we’ll have to dig in and grind the result out. 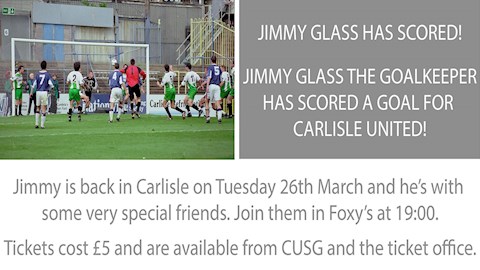 CUSG: An evening with Jimmy Glass and friends

"We’ve said in the dressing room that we can’t be too down because we’re still just one point outside the play-offs. There are still nine games to go, and everyone is going to slip up.

"Teams also have to play each other, so I think we’ve all just got to be really positive. We know we’re capable of beating anyone and I think we’ve proved that throughout the season. We’ve just got to dig in for the next nine games and give it a right go.

“We’ve got the quality in the dressing room, I think we’ve got to learn to adapt to different situations. Hopefully we won’t play many more games in those kinds of conditions, but if we do we have to deal with them better. I think a lot of teams are worried about us and the type of football we play."

“We’ll go to Forest Green in a positive frame of mind and look to assert ourselves on the game," he added. "We want to go there and play like we know we can and come away with the points to show for it."

And on the news that the club have triggered a clause in his contract which will see him stay at Brunton Park for another season, he said: “It was nice to see the fan reaction to the news that I’ll be staying here.

"I think I’ve done well this season and I’ve been really happy with my own form. I’ve just tried to be as consistent as I can. There are still a few details to sort out with the contract but once those are sorted I’ll be here next season.

“I was pleased to come back in the summer and I’m pleased with my form, so another year gives me a bit of security as I get to the age of 35. Like I said, if we can get a few of the details sorted out then I’ll be more than happy to be here next season.”