Forward Nathan Thomas bagged his first goal for the club at The New Lawn on Saturday and we caught up with him shortly after full-time to get his thoughts on what had been an excellent team and personal performance. 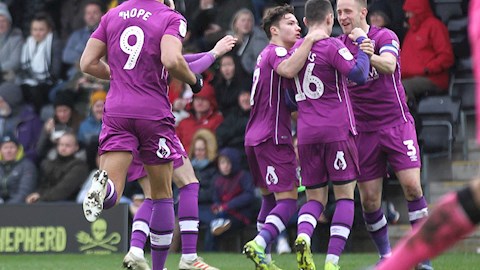 “It was important we put in a good performance because we felt like we really let ourselves down on Tuesday night,” he admitted. “We wanted to bounce back and come and get a result, and we all feel in the dressing room we should have taken the three points from the game.

“We worked on something a little bit different in terms of the formation and I think it paid off. We sat in a little bit and let them come onto us and, when we turned the ball over, we looked really dangerous on the counter-attack.

"Against a team which I think has the highest possession-based stats in the league we played really well and made them look very ordinary for long stretches of the game. The performance gives us something to build on ahead of next Saturday now."

And on his own energetic display, he told us: “I feel like I’ve eventually shown what I can do today. It’s taken me a few games but I’m delighted to finally get a goal, even though I was disappointed not to score the other chances I had.

"It’s a starting point and hopefully I can go on and get a few more goals before the end of the season."

“When it hit the back of the net I felt relief more than anything," he revealed. "I missed two or three chances in the first half and I felt like I’d let the team down a little bit, because they were very good chances. I was just delighted to get us back on level terms and it really felt like we would go on and win the game from there.

“With the chances I missed in the first half it was about that last little moment. I maybe hesitated a little bit for one chance, and there was another one where the ball just didn’t quite sit right.

"I can make all the excuses in the world, but I still should have put the ball in the back of the net, and I was frustrated coming in at half time. I just had to clear my mind and it was good that the first opportunity I got in the second half was the one I stuck away."

“You can’t beat yourself up if you miss chances because you need to be ready when the next one comes along," he explained. "The one I scored was the one where I didn’t really have any chance to think, it was the most instinctive finish of all of them.

"Sometimes that makes it a little bit easier, when you don’t have the time to think about what you could do." 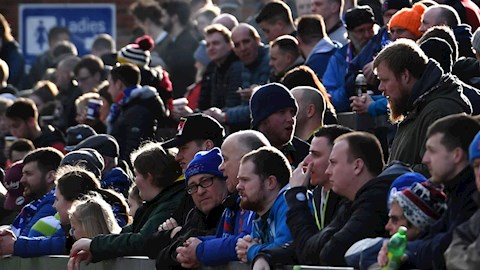 And on his explosive return to the starting eleven, he commented: "It’s all about taking your opportunity when you get a chance to play. I’ve been a little bit frustrated so far, and I felt like I maybe deserved more game time than I’ve had, but I’ve been patient and worked hard.

"I felt like I’ve taken my opportunity when I’ve got it and I just want to build on it now and put in these performances every week. I’ve spoken to the manager in the last couple of weeks and I told him I was a little bit confused about the position he was asking me to play.

"It was a different way of playing a front three to what I’ve played in the past, so it was about me getting to grips with how the gaffer wants me to do things. I struggled a little bit at first but we’ve sat down a few times and he’s shown me what he expects, and I feel the more games I’ve played it’s got better and better.

“I enjoy playing the style of football we play. We play on the counter-attack and we’re really good going forward, especially when we break through midfield. We can go from front to back really quickly, and if we can keep the back door shut we feel like we’ll always score goals."

“We’re down to single figures in terms of games remaining now so we need to put good performances in every week," he said. "We all know what we want to achieve this season, and although we’re disappointed to only be coming away with a draw today, we might look back at this and see it as a really good point.

“It’s all about getting results at this stage of the season. I think you can sacrifice the performance a little bit now and just make sure you pick up three points, which is what we want to do at home on Saturday.

“As long as the play-off pack don’t pull away it’s still in our hands. We've got teams in and around us to play, and there are a lot of teams above us who will play each other and drop points, so it’s up to us how much we want to challenge.

"The pressure is on every game so we have to go and get the results."