Aston Villa youngster Callum O’Hare marked his sixth appearance for the club, since joining on-loan from the Villains during the January transfer window, with his first ever senior goal, a match winner which brought an end to a run of five-games without a victory for his adopted club. 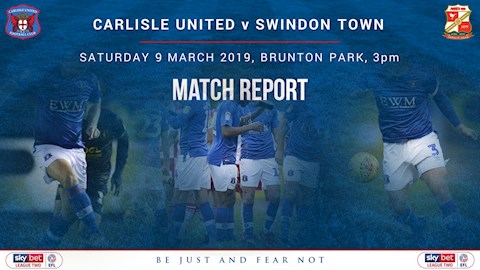 The 20-year-old has enjoyed an all-action introduction to life in League Two, having started all six of his games with the club, and came in for some praise from manager Steven Pressley at his post-match press conference.

“I’m so chuffed for the kid because I know he’s been desperate to score,” he said. “He’s been a shining light for us and he’s one who is always looking forward in the way he plays.

“Players like that sometimes give the ball away in the final third but it’s always because they’re trying to make something happen. We lost Jack Sowerby back to Fleetwood, and he was a player who contributed to goals, and that’s one thing we’ve been lacking of late.

“That’s why it’s important that we get goals from all areas and Callum a player who can add that for us.”

“I could see what it meant to him [to score his goal], he was delighted,” he continued. “He’s contributed to a number of assists so this was his next step, and I think it was a great finish from him.

“He’s been unlucky on a number of occasions, but I do think he had an excellent game. He’s been performing well for us and he’s that high energy type of player I like to work with.

“It’s testament to Aston Villa that there’s absolutely no ‘big time’ about the lad at all, and he really does want to make an impression. That comes through in how he conducts himself.”

Having just picked up his Peter Jackson the Jeweller man of the match award in the sponsor’s lounge after the game – a stunning watch – we just couldn’t allow him to leave the building (even though he had a train to catch) without first speaking to him about this special moment in his career.

“It felt brilliant for me to get my first professional goal,” he admitted. “It was massive for me, but the main thing was that we got the three points. That was exactly what we needed because we’d done everything we could to get the win.

“I’m really buzzing that I finally got a goal and hopefully there’s many more to come. I’ve gone into every game thinking that it would the one where I’d score so to finally get it is a great feeling.”

With Nathan Thomas having moved into a position to go for goal himself, he said: “I saw he was about to pull the trigger but I could also see he had a few defenders in front of him.

“There was a holding midfielder just in front of me so I thought that if I could get past him I’d be able to nick it and shoot. As soon as it rebounded off the defender I was there and fortunately I put it in.

“I just tried to keep calm and get my touch right. Once I’d done that I knew I was going to have to hit it low because that would give it every chance of going in. I didn’t want to fluff anything because I knew how much we needed the win.

“Once it went in the celebrations started because I was buzzing. It was amazing to be doing that in front of the Carlisle fans because it’s what I’ve wanted to do since I first got here.”

“I might watch the highlights a few times,” he admitted. “It’s more special because it was so important for us to win the game, and my goal helped us to do that.

“We’d gone five games without a win and even though we didn’t really play at our best we managed to get the result.”

And with Villa fans monitoring this progress from afar, it was no surprise to see the official social media channels fill up with well wishes from the supporters of his parent club.

“It’s nice to have the Villa fans commenting and they always tag me and stuff like that on Twitter,” he commented. “That’s nice to see. They seem as happy as I am that I scored, which is brilliant.

“The staff at Villa are telling me to keep improving because they want me to go back there as a better player. The gaffer here has been brilliant for me as well because he’s showing me what to do defensively and he’s telling me that when I’m on the ball I can play my game, and that’s really good to hear.”

As for what he thinks the weekend victory will mean to the dressing room, he said: “Hopefully it’ll give us the confidence and momentum we need. All we talk about in the dressing room is winning every game. If we do that we’ll be up there, so that’s what we want.

“Our focus is on what our jobs are and we listen to everything the manager and his staff talk to us about. I think you could see that we were a bit tense in the second half [on Saturday] but we relaxed once we got in front again.

“I think everybody will be looking forward to the Notts County game now because it should be a good one. They’ve had some good form, even though they’re at the bottom, and these are the games you have to watch out for.

“They’re fighting against relegation, so they need results, but every game is important to us as well. They’re bound to throw everything at us. We want the points so we can push for promotion so it should be a really good game.”

But having notched that all-important first strike for the club, we wondered if he’d set himself any targets with 10 games left to go.

“I’ve got a target but I can’t say anything just in case it’s a jinx.”

And he refused to reveal any more.

Click HERE to watch an interview with Callum O'Hare on iFollow United now.

INTERVIEW: I know I've got to work hard to get into the team


Forward Omari Patrick became United’s last January signing with just over an hour left until the deadline day window shut, following what had been a hectic and dramatic day for the former-Bradford...

INTERVIEW: I think this is a club that will suit me


Midfielder Callum Guy put pen-to-paper on an 18-month deal on Thursday morning and on of his first duties was to meet the local press as he started the process of settling into his new surroundings.

INTERVIEW: It's important the senior players show the right mentality

INTERVIEW: I know I've got to work hard to get into the team


Forward Omari Patrick became United’s last January signing with just over an hour left until the deadline day window shut, following what had been a hectic and dramatic day for the former-Bradford...