Carlisle United are delighted to confirm that a club option has been triggered which keeps keeper Adam Collin at Brunton Park until the end of the 2019/20 season. 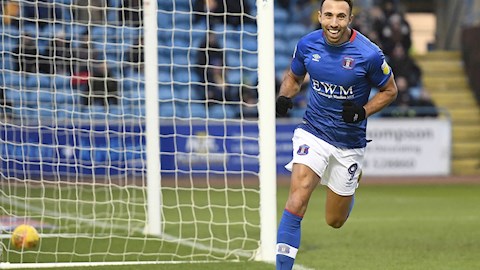 The trigger clause makes the Cumbrian-born stopper the second player in the space of 48-hours to be tied down following the news on Friday night that a similar option had been activated with striker Hallam Hope.

Collin, 34, returned to Carlisle for a second spell in July 2018 when he became the club’s fifth summer signing. He has made 37 appearances so far this season, with nine clean sheets to his name, and has a total of 196 appearances under his belt for the Blues from his two spells with us.

Manager Steven Pressley said: “He’s another player who has made a good impression on me since I came into the building.

“Outside of being a good goalkeeper, and this is a really important aspect for me in terms of retaining players, is his character and his personality. He’s a really good character and I think he’s a key figure in the group. We need to build the club around players like this and that’s why we’re really pleased that we’re keeping him here.

“Another aspect is that it’s vital that we continue to plan for next season, as well as get the job done through the last 10 games of this one. In some cases we don’t always immediately move on things, but we’re certainly looking ahead and thinking about what we need to do.

“Hallam Hope and Adam Collin are examples of that over these past few days and, for us, we feel we’ve done two very good bits of business. It also demonstrates that players who are performing well will be rewarded. In time we will sit down with others within the group and, hopefully, we’ll see the nucleus for next season really start to come together.”

Collin kick started his career with Carlisle when he came up from local side AFC Workington in the summer of 2009, to train with the squad, prior to signing on a full-time basis.

Having cut his teeth at Newcastle United, with spells at Oldham and Doncaster along the way, he went on to make the number one spot his own at Brunton Park with 159 appearances in his four-year stay.

He featured in two Wembley cup finals for the Cumbrians, picking up a JPT winner’s medal in 2011, and became known as a spot-kick specialist following a string of saves in shoot-outs and during games when faced with penalty kicks.

He moved to spend three years with Rotherham in May 2013 and then had two seasons with Notts County, with more valuable experience gained in play-off campaigns, where he made a total of 81 appearances.

Director of football David Holdsworth said: “Adam is an outstanding professional and he’s exactly the kind of player and individual we want at this club.

“His attitude has been exemplary and he’s a great example to those around him with the way he gets on with his job with absolutely no fuss. His form has been excellent and, even with his experience, we feel there is more to come.

“We’re pleased to have him here and delighted that we’ve secured him for another season, hopefully where he’ll be fighting for his place in the division above."

CLUB: Keeper to move on


Carlisle United Football Club can confirm that keeper Magnus Norman has turned down the offer of a new deal and will be moving on from the club in the summer.