United’s chief executive Nigel Clibbens confirmed that there has been no change to the budget at the disposal of the manager this week as the club continues to speak to potential targets and their representatives through what is always a busy period.

“We’re exactly as we were last year in terms of overall budget,” he said. “The forecasts we’ve been putting together are working from the same numbers at the same point in 2018.

“As the season goes on and you get football fortune, and things like that, the budget can change. We saw that when we went into last season with a figure, and then we were able to look at it again once we got to January.

“We envisage that we’ll be doing that again, but we’re starting from the same point this time round.”

Always an interesting comparison is where the club fits into the division in terms of playing budget – information which is released twice during the course of the season.

“We get benchmark data after the August window and again after the winter window,” he explained. “We were in the bottom half of the division in the February return from last season.

“The interesting thing from that data was that if you looked at the top three or four - and I mean in terms of budget size and the amount they were spending, not their league position - their commitment at that point was considerably higher than it had been the previous year.

“The trend we’re seeing is that the big spenders are spending more in the quest for success but, if you look at the league table, there’s very little correlation between those who were spending and those who actually gained the success. As a statistical exercise you wouldn’t be relying on saying that those who spent most was anywhere near being a reliable measure of success.” 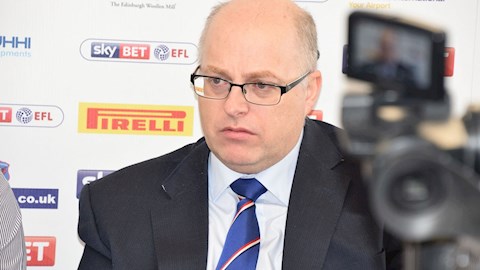 INTERVIEW: Very pleased with the arrangements

With United’s budget unchanged for the coming season, we wondered if the club would remain in a position to compete for a place in the top seven, if not the automatic slots, come the kick off in August.

“The key to this is that you need a budget which allows you to be competitive,” he told us. “But, beyond having a base level, it’s then what you do with the money you have available that really matters.

“Looking at other clubs you can see that some will spend their cash on a lot of players, or on a tighter squad, or you can have a lot of churn and a smaller number of players. There are different ways to go about your business but, from our point of view, we’ve said repeatedly that we have to spend every penny as wisely as we can.

“The budget we have has proved to be competitive for us last season and a lot of clubs found, as we had found in previous years, that spending a lot more money on the playing side of things doesn’t guarantee success. In the end our final positional outcome wasn’t determined by what our budget was.”