United’s chief executive Nigel Clibbens spoke this week of the ‘support and comfort’ given to the club by the ongoing commercial agreement with EWM which has seen the two organisations forge and nurture a strong working relationship. 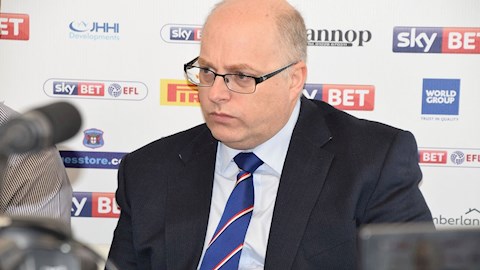 INTERVIEW: iFollow to be discussed at AGM

“There’s nothing new to add to what we’ve said before on how the relationship is working,” he confirmed. “The arrangements we’ve had continue and we’re very pleased about that.

“There’s a continuing support and comfort given to the club and that will run through next season. We haven’t discussed it beyond that, but that doesn’t mean it will end there. It will go through a natural process of review again, as it does at regular intervals anyway.”

“We continue to do the best we can with the resources available to us, but we fully understand and recognise that the fans would like to know if [this relationship] will develop and move on from where it is now,” he added. “It’s not something we can affect, but the club is in a position that many other clubs would dream of.

“Financing football clubs and operating within the football business requires a level of funding. That’s either funding coming in, or being there as an emergency to give the protection that almost all clubs require.

“If you haven’t got that it can get very difficult very quickly. With us having the support of EWM it puts us in a far better position than we might otherwise be in.”

“When I came in, one of the things that was raised as a concern was the reliance on Andrew Jenkins and Pioneer as funders of the club,” he commented. “That was seen as a big risk, not because he was seen as somebody who was ever going to stop supporting the club, but because, being honest, he was close to 80.

“Everyone knows that these things can’t go on forever. We’ve now moved on to a situation which puts the club in a better position and it’s good for everybody. Where that takes us in the end – only time will tell.”

On whether the club can be perceived to be showing ambition, he said: “Sometimes it’s not about having a stream of cash coming in to ‘go for it’ as some people might say, it’s about having things there so that if you need support, it’s available. If financial support isn’t there when you need it then you’ve got a problem.

“Obviously the perception of a club showing ambition can often be linked to spending. People see it as being the case that the more you spend the more ambitious you are. I don’t think that’s necessarily the case.

“I think ambition comes from your desire to succeed. If you do everything you can within your power to make use of every single resource you have at your disposal, then that is good business sense and practice.

“If you aspire to get somewhere, however long it takes, I think that’s what real ambition is. We have that ambition as a club. Often we don’t have as many tools as other people, which makes it more difficult for us, but that’s life.”

“What we’ve seen in my time here is that we had a period where we had the financial benefit of selling players, along with big games against the likes of Liverpool, which were lucrative for us,” he added.

“The club made the decision at that point to maybe ‘have a go’ and to spend the revenue it received on doing that. We got quite close, but not there, and in the absence of having those windfalls you then have to operate your club in a prudent fashion that means you’re there to compete again next season.

“You can’t be starting a season on -12 points and having questions of whether you’re even going to be in existence. The first job is to get past that, and then you look to do everything you can with the resources you’ve got. That approach certainly has EWM’s support, and it’s the way we look to operate now.”

“Also over my time here we’ve seen that we’ve worked hard on addressing the losses, which were unsustainable, to try to get from where we are to a point where we’ve eliminated all of those losses,” he said. “If we’d tried to do that in just one season there wouldn’t be much left for any spending. That’s why this is a long process.