Attacking midfielder Jack Bridge became Steven Pressley’s fifth summer signing on Thursday morning and he confirmed that it was his talks with the United boss which had influenced his decision to say yes to a move which takes him a long way from his Essex home.

“I met with the manager a few weeks back, I had a good chat with him and for me that was the main reason for me wanting to come here,” he confirmed. “After speaking to him about the way the club is going to be next season it was all just massively positive, and hopefully I’ll go on to have a good season here.

“The manager was a big part of why I signed, as was the way he wants to play football. We spoke about the way he’s looking for us to play and for me it felt like a really good fit. I couldn’t have asked for much more.

“I don’t think I could have got further away from home, to be honest, but it’s my first day at the club and everybody has been so welcoming already. The distance is a massive factor that I’m going to have to deal with but, like I say, the manager talked about what he wants on the pitch and for me I didn’t think there’d be a better suit.

“It was a no-brainer football wise, it’s definitely the right place for me, so it just left us to sort out a few things on a personal level. That’s been done and here I am ready to kick on.”

A victory for Bridge’s former club Northampton over the Blues in January, just days before Steven Pressley was appointed as Carlise boss, did little harm with the manager seeing first-hand the potential in his latest recruit.

“He luckily came to the right game to see,” he joked. “The manager did say he was at that game and the goals meant it was a good game for me personally. That’s the kind of thing I want to do more of next season.

“Last season, at Northampton, I played the most games I’ve played in a season, so that was a positive. The main thing for me now is to nail down a specific spot in the team.

“I’m an attacking midfielder and that’s where I want to be playing my football,” he explained. “It’s where I feel I can be most effective. I want to add goals to my game, that’s an obvious thing, and I want to be creating chances for other players as well.

“I see myself playing in the number 10 role, but I’ve had a lot of managers who have played me in all sorts of different positions. The gaffer is big on energy and he wants to play football to feet, he enjoys that type of play, which is ideal for me.

“I feel like one of my biggest strengths is getting on the ball and trying to make things happen. I like to create chances for myself and other people, I just like to be on the ball as much as I can.” 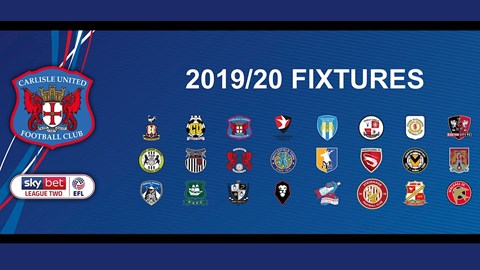 2019/20 FIXTURES: United start and end the campaign at home

And on the length of the deal, he commented: “This year is massive for me and it can make a big difference to how my career ends up going.

“I’ve got to do as well as I can and make sure I stay in football. I had a chat with Keith [Curle] about my time at Northampton but I think this is what had to happen, and that was from my point of view as well.

“The right thing to do was definitely to leave the football club. I’m happy that’s happened and it’s good to be here now. It’s a one-year deal so you’ve really got to make the most of it and take every opportunity that comes your way.

“I’ve got a season to make the place mine. It’s important for me to have a good season this year and I didn’t think there would be a better place for me to do that than here after I spoke to the manager.”

Looking back at his career, which saw him progress through the youth system with Southend United, he said: “I was there from under-9s, I went all the way through their system and I left at around the age of 22 which, again, was the right time for me to do that.

“The loan spells with Soham Town Rangers and Chelmsford were superb because they were eye-opening. It was my first taste of men’s football and I loved it. The experience definitely helped me to develop as a player.

“From there it was on to Northampton, and I enjoyed it with them, but I’m looking forward to this challenge now.

“My home is in Southend and I got the train up the other day, and it took me nearly seven hours so it’s a fair old way, but it’s something I’ll deal with. It was something I did have to consider, and it isn’t ideal, but I wanted to come here to play the football the gaffer wants to play.

“I actually had a look and I think there are flights starting from Carlisle to Southend airport, and I live about two minutes away from there, so that will be handy!”

And on his first day at work, he said: “We’ve been back in for a few different tests today so I’ve met a few of the lads already.

“We had a bit of a run, which was quite tough, but it’s been good. Everyone has been really welcoming which has made it easy for me to come in.

“It is a little bit nerve-wracking when you come to a new club because you’ve got to prove yourself to the fans as well as the manager and the rest of the players. There are a lot of people to prove yourself to, but everyone has been great with me so far.

“I’m looking forward to getting back in for pre-season and meeting all of the lads.”

INTERVIEW: It's a real kick in the teeth


Defender Jack Iredale put in what was his best performance in a United shirt so far at Rodney Parade on Saturday, but he admitted afterwards that it counted for little with the points having been...