United’s newly-appointed assistant manager Gav Skelton spoke this week about the pride he felt when he was offered the opportunity to step up as Steven Pressley’s number two as part of this summer’s backroom restructuring process. 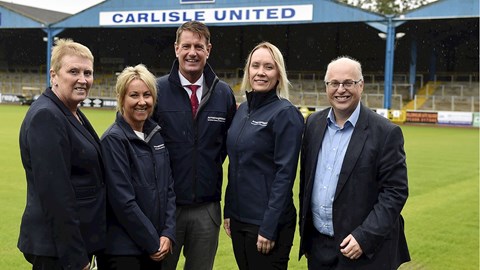 The former-Workington and Queen of the South manager brings a wealth of playing, coaching and managing experience to the post, having worked most recently as the academy Professional Development Phase Coach here at Brunton Park.

Skelton, 38, joined the club’s centre of excellence as an eight-year-old and played both sides of the border, with over 200 appearances for Gretna in a seven-year stay one of the highlights of his career.

“I’m delighted that this has happened,” he said. “There have been a few changes recently and I’m fortunate enough that I’ve now made the step up to the first team environment. It means a lot to me and I can’t wait to get started.

“I first spoke to the manager and David [Holdsworth] about it a couple of weeks ago. They went through the brief of what the role would entail, and they asked me a couple of questions about how I felt I would fit in with that.

“There was then a phone call a couple of days later and I was invited to come into the club for another chat. I wasn’t sure what that was going to be about, a lot goes through your mind, as you can imagine, so I was over the moon when I was told the good news. I couldn’t wait to tell my wife and family and they were just as excited as I was!”

As to whether he’d had any idea prior to the appointment that it was coming his way, he told us: “I am ambitious so you always hope something like this will happen.

“The good thing was that I was in a good role anyway, and it’s always a shame when people lose their jobs, particularly when you know them well. That’s difficult, but this opportunity came and, like I say, I’m grateful for that.

“But no, I never expected that it would come my way because I’m not that type of person. However, when it does happen you just want to make the most of it.”

“I know it sounds corny, but I’m a local lad and this means a lot to me,” he added. “Signing my first YT form was massive for me back when I was a boy, and I can remember vividly the day I signed my first pro deal as well.

“It was the day before the Jimmy Glass incident and my career has gone on from there. I have a long history with the club and it does mean a lot to me to be working here, and particularly in such an important role. That’s why I’ll be doing everything I can to make it a success.

“The big thing is that I’m a fan as well, and I started watching games when I was just four or five. I’ve been stood on the grass bank at Wigan, before that was done up, and at places like Halifax and Rochdale in the terrible weather, so this really does mean the world to me.

“My grandparents and uncles are season ticket holders so it’s a proud moment for my family as well.”

As for the experience he will bring to his new position, he explained: “Over the years I’ve worked in a wide range of roles, from manager and assistant manager to working with youth teams and young players.

“I’ve played the game for a number of seasons and I’ve been a club captain, and I think all of that experience does help me. I appreciate what people are looking for in different departments within the club and it’s like anything in life, when you think about it. Experience is really valuable because it helps you to do your job.”

“I’m really looking forward to progressing with what we’ve already done together so far,” he said. “We haven’t worked together before as such, but I’ve known him in a casual way for quite a few years.

“I gave him a cup final medal by missing that penalty all those years ago, so maybe this is a bit of payback! I’ve had to go through all of those years of hurt to get this, but that’s fine.

“There are no grey areas, I know exactly what I’ll be expected to do, be that in training, on a match day, or whenever. As I’ve said, I think my past experiences help with all of that.”

“From the first day he came in he’s had me going to watch games and things like that, and I think we’ll make a good team,” he continued. “I’m looking forward to learning from him and hopefully I can assist him with making this club successful.

“We spoke about a lot of different things about what he expects from, and about what I can bring, and we agree that part of the role of the assistant is to challenge the manager.

“Obviously you need to buy into what the manager wants to do, which I do, but there will also be certain circumstances where a different point of view will be needed, and I’m looking forward to contributing with that.”

“As far as working with him goes, I’ll lead off him, of course I will,” he commented. “I’ve learned over the years that it’s important to react off the manager daily.

“They have enough things going through their heads and they have a lot of pressure from inside and outside the club to deal with. You have to understand that and, if you do, it helps to build up a very strong relationship.

“One of the skills as an assistant is knowing what’s important and when the manager needs to be involved, because there will be certain things you can sort out on his behalf to help to lighten the workload.”

Speaking more about the manager’s role at Workington, which he turned down at the beginning of January, he said: “I’m really grateful for this opportunity and I know people put two and two together and said things, and stuff like that, when it didn’t work out down there at the start of the year, but it was never the case.

“I regret what happened because I have a lot of respect for everybody at that club. They were fantastic with me, but I do feel it was the right decision for me. I let some people down, which I do regret, but personally it was the right thing for me to do.

“That’s why I can’t regret the decision itself because I’m at a good football club, in a professional environment, and it’s a place where I’ve always wanted to be.”

Next up for the new assistant manager is the return to pre-season in 10 days’ time.

“It’s good to get your break but I can’t wait to get back for pre-season,” he said. “The fixtures are out next week so it all soon comes around again quickly.

“I’ve spoken to Dave Waldie [strength and conditioning coach] and I know it’s going to be a tough pre-season. Hopefully the work we do through July will mean that we’ll give ourselves every opportunity to be successful.

“The first aim is always to improve on last season, so we want to go for the play-offs at the very least. With the players the manager is looking to recruit everyone is feeling really positive that we’re going to have a good season.”