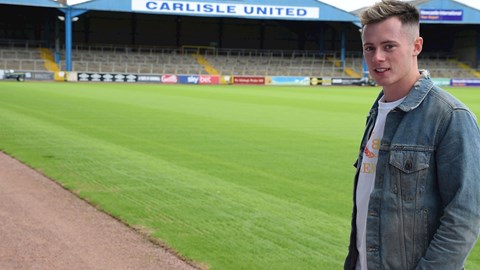 Clearly arriving with a feeling that he has plenty to prove, we spoke to him about the move earlier this week.

“I was out of contract in the summer, with my time at Villa ending, but I’d had a few phone calls,” he explained. “I spoke to the gaffer as part of that and he was the one who excited me the most.

“I met him last Wednesday and what he had to say was really interesting for me. That’s why I’ve ended up here and I’m looking forward to getting started.

“The aim now is to get through pre-season so that I’m as fit as I can be. From there onwards I’m here to help the team and hopefully we’ll be looking at a promotion.”

“It just feels like I’m ready, which probably wasn’t the case when I first went out on my loans,” he added. “Physically it’s like I’m turning into a man on and off the pitch, and I do feel ready to prove myself.

“The other thing is that I was injured for the majority of last season [hamstring] so I can’t wait for a fresh start and to be playing regularly again.”

On his departure from the club which had brought him through their academy system from the age of 14, he told us: “I’d anticipated that Villa would let me go, so that didn’t come as a shock to me.

“You kind of know as a person where you are. I’m at an age now where I need to be playing games regularly and that wasn’t meant to happen for me with them.

“They got promoted and I’m delighted for the club that they achieved that. I’ll always keep an eye out for their results and I hope they do well. I just knew that it was time for me to go so I that I can start my career and start playing games.”

Speaking more about what the manager said to get him up to Cumbria, he said: “What he talked about reminded me a lot about what the two managers I’d grown up with at Villa used to say.

“With some of the things he was saying it felt like I was sat in a room with them again. I’ve enjoyed working with them and I feel I can do well for Steven now that I’m here and I’ve heard what he wants. The main thing is that he’s a manager who believes in me.

“I had that at Stevenage, and I did well there, so it feels like I can kick on here and back his faith in me. I’m at the age where I need to be proving what I can do. I can’t keep being someone who nearly gets there, it needs to happen.”

Having enjoyed loan spells with Stevenage, Crewe and Newport County through his time with the Villains, he commented: “I probably haven’t played as much as a I would have liked with any of them, so hopefully this is the year where I kick on.

“I’m used to League Two and what it’s about now because the games I’ve played in the last three seasons have been at this level. It’s been enjoyable because it’s proper football where results matter.

“I’ve seen all sides of it with having to fight for results to stay in the league and then, at the opposite end last year, seeing the boys at Newport having a run at the play-offs was excellent. To miss out in the 120th minute - I wouldn’t want to be in that situation again.

“Promotion is possible in this league if you have the right players and mentality, so we have to be in with a chance.”

On what we can expect to see from him, he said: “I’m similar to Cal [O’Hare] and what the fans have seen from him. I’m energetic, but I play a bit higher than he does. I like to create and score goals.

“I describe myself as a forward, but that isn’t just centrally. I enjoy myself most when I’m on the ball and my main hope is that I get a run in the team and score a few.

“I’ve spoken to the manager and the kind of player he’s looking for is someone who has energy and who will work hard, and I think I tick those boxes. He wants a goal scorer as well, so hopefully I can do all three for him.

“I one hundred percent think I can deliver at this level. I haven’t scored that many yet, but I haven’t played that many games either. My record for starts and goals isn’t too bad so if I can get a run of games going I’m confident that I’ll get a few.”

Having mentioned Callum O’Hare, who enjoyed an extremely successful loan spell at Brunton Park last season, he said: “I speak to Cal all the time, so when he was here on loan last year we used to keep in touch and talk about things.

“He told me how he’d enjoyed it here and he had good words to say about the club, the fans and the gaffer.

“I’ve never actually played here before, so that’ll be good. I was on the bench at Newport when Carlisle came down to us, and there weren’t many teams who went there and tried to play football.

“When I spoke to Cal after that game I told him they’d had a right go and you could see the way they wanted to play. Not many teams do that at Newport, so it’ll be good to be part of it.”

Click HERE to watch an interview with Harry McKirdy on iFollow United now.