The immediate future of popular attacking midfielder Jamie Devitt has been of particular interest to the fans as they keep their fingers crossed that he will come to the decision to sign his new contract offer and extend his stay with the Blues into a fourth season. 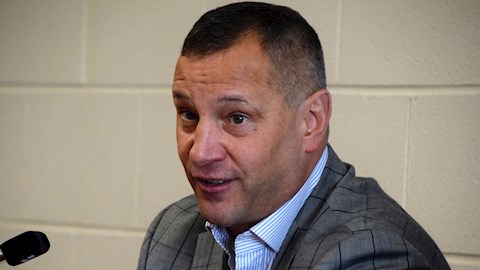 INTERVIEW: An offer for a forward

The 28-year-old joined the Cumbrians three summers ago and has bagged 22 goals in 130 action packed appearances. An excellent haul of 12 goals last season – his career best to date – helped him to his second consecutive players’ player of the year award and kept him firmly in the thoughts of the club’s football department as they continue to plan for the next campaign.

“What I can say is that Jamie was the first player I spoke to in the group with regards to a new contract,” director of football David Holdsworth said. “He has been offered an extremely good deal, which is still there for him to sign. We would love him here and we all want him to be here.

“He has a role in the team, and that’s why he was the first player to be offered a contract. I’ve had conversations with his agent, and I know Jamie has spoken to other clubs, but he still hasn’t signed for anybody. He knows our door is still open and he also knows that Steven would be happy to build his team around him, so we’ll just have to see what he decides.”

“What we have to remember is that last year our club was put in a crippling position,” he continued. “I spoke to Jamie at Christmas, at a time when he felt he might move on, and I told him we wanted to keep him here.

“Jamie had a good season last year, which is why his agent is exploring other avenues, but we definitely want him to be our player.”

Speaking from an administrational point of view, chief executive Nigel Clibbens said: “We would all like Jamie to be here because we think he’ll be good for us.

“The manager and David know how they want to manage the squad, and that includes timing and length of offers, and all of that kind of stuff. They’re very much footballing decisions and judgements are done in good faith and in the best interests of the club.

“One of the things we’ve identified from the past is that we didn’t have enough football expertise to help with these decisions, so we’ve changed that round so that the people who are leading this are able to progress things in what we hope will be the right way.

“As with all of the players – Devitt, Jones and Scougall – you make your offers in good faith because you want the players to come back. You tend to be happy to keep those offers open for as long as possible and, at the moment, there isn’t a sense of panic.

“We are looking at other options, but there’s no reason for us to close the door. There does come a point where you might have another player for that same position, and it might be a really good option, so that’s not something you could allow to pass.

“We’re not at that kind of point at this moment in time. Steven and David have been working hard for a number of months to make sure we have flexibility and options available, whatever decision these three players choose to make.”