Striker Hallam Hope demonstrated on Tuesday night why he has become the subject of interest for other clubs this summer when he smashed an unstoppable volley into the roof of the net just two minutes into his first appearance of pre-season against Scottish giants Hibs. 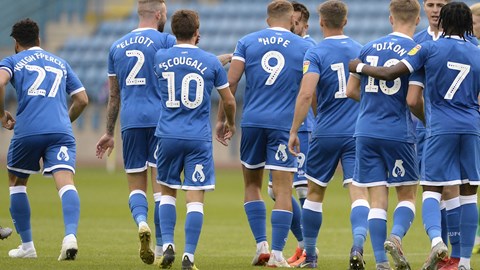 Hope, 26, indicated via his agent at the end of last season that he would like an opportunity to join a club at a higher level, if such a chance arose, and national sports pages revealed this week that League One Blackpool are ‘pushing hard’ to take him away from the Blues.

Speaking about the latest on the situation on Tuesday night, Carlisle boss Steven Pressley said: “He scored a fantastic goal and I said to him afterwards that he’d added a couple of zeros onto the end of his transfer fee!

“Look, we know there’s interest, and as I’ve said before, Hallam has expressed an interest to play at the highest level. I accept that.

“I expect him to apply himself properly if he remains here and I’ve had no problems with him. He looked excellent out there tonight [against Hibs], he was really sharp and he looked full of confidence and energy.”

“I obviously hope he stays here,” he added. “But, if he doesn’t, I’ve got no complaints about his attitude. He’s an ambitious young player and if he gets the chance to go to a higher league then of course he will want to do that. That’s just the same as anybody else.

“One day I hope we’re in a position where we can keep these types of players, but we’re not there yet. We have to accept where we are, and I wouldn’t deny the player the opportunity to progress if the right offer comes in.”

“I honestly don’t know where things are at in terms of Blackpool,” he told us. “There’s been a change in management there as well, so I’m not sure how that is going to affect their transfer policy.

“We’re obviously aware that if they reach the valuation we expect then Hallam would like the opportunity to speak to them, but there’s nothing to report at this stage.”

With his own business still to do in the transfer window he admitted it was a situation he would like to see resolved sooner rather than later, for his own reasons.

“I’ll keep saying that I would love Hallam to stay here, but I understand his ambitions,” the manager said. “Obviously he’s one of my permanent players, so if he stays that leaves five loan spaces open.

“You can only sign five loans. One will come in later this week, in a midfield position, and we may also sign a secondary loan in a midfield area.

“That will leave us with three attacking loan spaces, so how we utilise the loan market will depend on Hallam’s decision. That’s why I’d like it to be resolved sooner rather than later.”