United head to Frenchfield Park on Saturday afternoon [kick off 3pm] to face local rivals Penrith in the second of their pre-season friendlies. 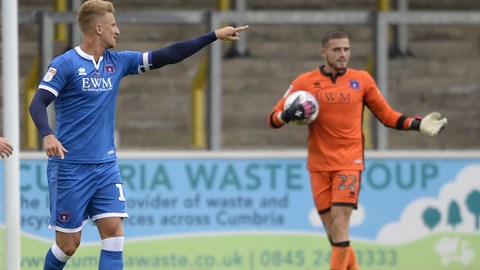 MANAGER: Byron is a terrific person

And United boss Steven Pressley is looking to utilise the 90 minutes for the full range of age groups.

“The first half will be a mix of senior and younger players, and that will be overseen by myself and Gav [Skelton] as normal,” he explained. “The second half will then be made up of under-18 players, and it will be Eric [Kinder] and Mark [Birch] who look after that for us.

“Obviously that means not every player will play, but it’s about getting the balance right for all of these players when it comes to pitch time at this stage of the summer.”

The split of youth and first team players to be used at Frenchfield Park has meant that the Saturday away game at Liverpool for the under-18 side has had to be cancelled, with the Penrith fixture taking priority.

“I’ve spoken to Liverpool and I’ve explained what our manager’s thoughts are for the first team friendly on Saturday,” academy boss Eric Kinder said. “With our lads being involved in the second half, we obviously couldn’t cover both fixtures.

“The good thing is that the under-18s have had an excellent day of training with the first team and they will also get pitch time against a men’s team on Saturday afternoon.

"I’d like to thank the staff at Liverpool for being so understanding and we obviously wish them well as they continue their preparations for the season ahead.”

Speaking about the intensity levels the first team boss wants to see, he told us: “We’ve spoken to Penrith and we know they aren’t against getting the ball back into play quickly, and that’s good.

“It makes for a far better pre-season game when the ball is constantly being recycled quickly because it keeps the tempo high and it helps with the intensity levels.”

“We have an excellent relationship with Penrith and we’re looking forward to going down there again,” he added. “It’s always popular with both sets of fans and, like I say, it will help us to get certain aspects of what we want to see and do into the group.

“As with all of the friendly fixtures, it’s about preparing for August and the start of what will be a long and tough campaign.”

The fixture presents another opportunity for the fans to see the new signings, with the manager still working hard behind the scenes to add more to the mix.

“We’re pleased with what we’ve done so far but I will reiterate that we have a lot more work to do in the transfer market,” he commented.

“The attackers are the next pieces of the jigsaw we want to put in place, there’s no doubt about that.

“We are having to show a degree of patience, but hopefully the supporters have seen that we are trying to build and do things properly. We want them to come to our stadium and be excited by their team.

“That’s why we’ve waited and, as I said on Tuesday, hopefully we will be much clearer on the position with incoming strikers once we get to the middle of next week.”