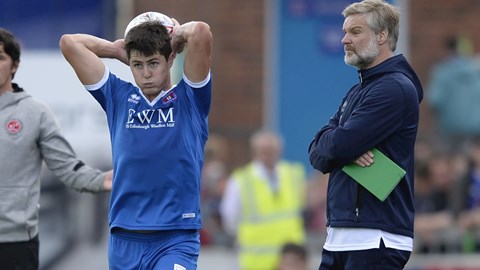 “We feel that we need one player who can give us cover in the centre back and right back position, we need two further midfield players, and we need three attacking players,” he commented. “That’s where I feel we are at this moment in time, and we are closing in. I want a squad that’s going to be tight and which will have a real desire to succeed.

“The back four are coming together well and the midfield three have the energy and football qualities we need. We’re short at the top end, we know that, and we probably weren’t quite able to maintain our intensity against Fleetwood because of that.

“Kelvin [Etuhu] is probably looking at around November for a return, and that’s why we need to recruit two more midfielders to help in that role and that area. We need a physical presence in there because we know certain games will require different qualities.

“We’re going to work with six defenders this year, plus young Jarrad Branthwaite, because we’re excited about him. We have five of those in place already, so we need just the one more who will provide competition for that right-hand side.

“The success of a team generally is down to the strikers, they’re the ones who can really make the difference. The rest can work hard and press, but you need the strikers to finish things off, and that’s why they’re going to be an important part of the jigsaw. As I say, three very attack minded forward players is the number I’m looking at.

“When it comes to fitness, all of the players will have done a pre-season, so it’s not so much like a free agent coming in who hasn’t done much. I would hope that our loan players will arrive here in good condition and they’ll fit in quickly.”

Meanwhile the manager also confirmed that a decision would be made on teenage Aston Villa midfielder Lewis Brunt following the game against Tranmere Rovers on Tuesday night.

“We’ll speak with Villa after Tuesday and we’ll make a decision on that,” he told us. “Thursday was his best training day last week, which was pleasing, so we’ll make an assessment on him and decide whether we keep him, or whether his development is best at Aston Villa for the next period after tomorrow.”