United boss Steven Pressley spoken to us about what had been a good performance against newly-promoted Tranmere Rovers shortly after full time on Tuesday night. 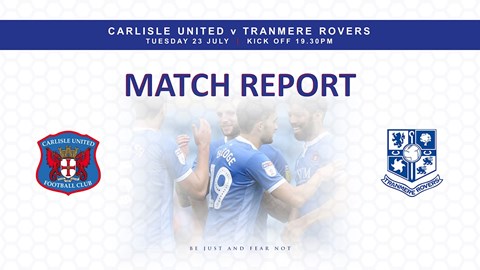 “It was a really pleasing performance,” he said. “It’s only pre-season, and I never get too high or too low about performances at this stage, because everything is about gearing up for the start of the season.

“However, we’ve started to add some tactical elements to our in-possession work, and we’ve been working on our out of possession reactions for a number of weeks now. It’s coming together, slowly but surely, but I have to stress that there’s nothing to be won in pre-season.

“It’s about getting ourselves to the right levels of fitness, and getting sharper. We’ve only got 10 days until that Crawley game now and there’s still a lot of work to be done. Having said that, the players will take confidence from tonight’s performance, and rightly so.”

Having started the game slowly, the Blues settled into their stride and confidently took a grip of proceedings.

“What a lot of people won’t know is that the players trained this morning [Tuesday] before the game and they covered between 5 and 6 kilometres, so we did work them hard,” he explained. “To see them respond in the manner they did, when you consider the distances they’re covering, was terrific. It’s hard for them but it’s about getting us to the levels I really want us to get to.

“This group is very receptive and they’re working very hard because they’re determined to do well. We know the high quality of the people we have in here because we see it from them on a daily basis. There’s been a lot of asked of the players and they’ve reacted brilliantly for such a small group.”

On a livewire display from attacking midfielder Harry McKirdy, he commented: “Within any team you need game changers, lads who can make the difference at key moments.

“We can work extremely hard at certain aspects of the game but those moments that change games come from the players, it’s something that’s very difficult for a coach to provide.

“Harry has that ability in abundance. He was heavily involved in both goals in the first half and he’s a really exciting talent. He needs to be battered about and moulded a little bit in certain ways, but he’s a really infectious kid who I think has a lot to offer.

“It’s pleasing to see that he’s beginning to grow in confidence, but also developing physically and improving in those areas all the time.

“Nathan Thomas is a similar kind of player. Like Harry, he has the ability to take people on and surprise the opposition. That’s why I’m delighted that we have both of them. These are the types of players in our team who can bring real positivity, and I want to encourage that.” 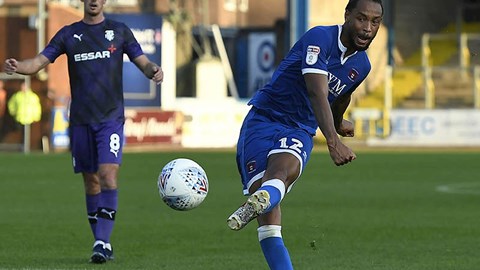 United’s first two goals on the night came from trialist Kwame Thomas, who teamed up with the Cumbrians ahead of the Fleetwood game, as he gave the manager plenty to think about with a very competent performance.

“It was good for him to get his goals,” the manager said. “The first one was a real striker’s goal, where he followed the rebound, and the second one was a terrific finish. He’s actually still only functioning at 55 or 60% in my opinion.

“What I want to see from him now is that he does it consistently. He gave us the link play we’ve been missing, but he’s a player who has been through an indifferent period. He’s one who I believe has potential.

“Aaron Hayden is the other one who has been here a while and he acquitted himself really well. He’s another who has shown the right type of attitude and, again, I want to see it consistently from him.

“What I won’t do is rush any important decisions like this. I want to make sure we get the right players here and that’s why I’m taking my time over everything.”

A late addition to the Tuesday match day squad was Mohammed Ali Sagaf, who caught a train up from London to get his chance to impress the manager.

“He made a real impression and you have to remember that he’s come in with us having just made a phone call to the kid at 11pm on Monday night,” the gaffer told us. “He hopped on the train first thing and Nathan Rooney picked him up at Carlisle station.

“He showed incredible commitment, having travelled up from London, and it shows how much he desperately wants to earn a contract.

“He’s a player that Nathan [Rooney] knows a lot about. They brought him in at Crawley last season, when Nathan was there, and he really impressed everybody.

“Nathan spoke about him to me and we’ve managed to bring him up here. He started the game in the number 6 position, but he’s more of a number 8. I thought he did very well. He’s another who we will assess over the coming days.”

On the injury to Hallam Hope, he said: “It’s possible that the news on him won’t be good, but our fingers are crossed. He overstretched his hamstring in training on Monday so he’ll have his scan and we’ll then have a better idea of how long he’ll be missing.

“Keighran [Kerr] is also with Dolly because he felt his groin a little bit at the end of training on Tuesday morning. We’re hopeful that he’ll be fine in a couple of days.”