United boss Steven Pressley gave us his reaction to the final friendly of the pre-season schedule as the Blues travelled to Dingwall to face SPL side Ross County on Saturday afternoon. 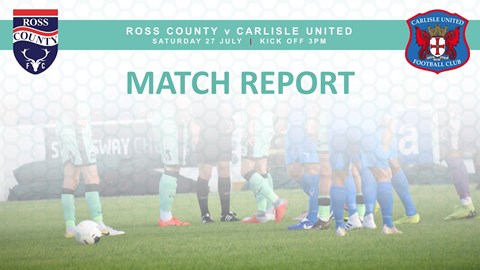 “It was a really good game for us but, in the sense of our physical condition, I thought we looked fatigued today,” he said. “It’s probably the most fatigued we’ve looked in any of the games so far.

“We’d had another really hard week of training, so the performance was the culmination of a number of aspects of that. We’ve really tried to overload the players over the last five weeks because we felt it was important to push them hard, that’s the honest truth.

“Thursday was another really tough day for them and then we trained again on Friday morning before we travelled up. We saw the effects of that, and I know it’s asking a lot of them, but it was deliberate.

“The group have applied themselves brilliantly during this period. We haven’t had a big group, as everybody knows, but the application, desire and intensity of our work has been fantastic.”

Speaking more about the overall performance, he told us: “I sometimes think that a game like this can be a good thing in pre-season. You go into Tuesday’s game and everybody is euphoric about the performance, but I know that we still have a long way to go.

“I actually thought the back four and midfield three had worked extremely hard, particularly in the first half, but the top three didn’t quite hit the heights I’d hoped to see. We weren’t as intense in our pressure and our immediate press, and these are things which give us a lot of turnovers if they’re done properly.

“Sometimes in pre-season you need little reminders that you’ve still got a long way to go. This group has worked unbelievably hard, but we have to focus on the fact there is still a lot of work ahead. That’s why this was the perfect test for us, it worked us hard, and I’m confident now that we’ll be ready come next weekend.”

“The way we played probably highlighted where we’re a bit short in the front area of the pitch,” he commented. “It’s an area where we need to find the right combination, and we’re very close on one striker who I think will be in the building on Monday.

“If everything goes to plan he’ll sign his loan papers and he’ll train with us on Monday afternoon. That’s a bonus, and we’ll also have Hallam Hope back next week to add to our options. Initially I thought he would be back on Monday but, having spoken to Dolly, I think we’ll see him return to full training on Thursday.

“That will be two good options up front that we need, and it’s part of the additional support we’ve been looking for.”

“The new arrival, if it all goes through, is actually a small, robust striker who is physical in his play,” he explained. “He can take the ball in and he’s also very mobile. We’re quite excited by him and I think he very much suits our style of play.

“New players always give everybody a lift, so that’s important for us as well, and we’re very much aware that we still need two more strikers after this one is done.

“We’ll continue to work on the other two targets we have, they are both loan players, and we still have to be just a little bit patient on them. I think we should still have the three players I talked about in the building by the Crawley game because there’s another midfielder who has come back into contention.

“We thought he already had a deal done and concluded with another club, but that appears not to be the case. If we get him, he’s somebody who can play both the 6 and 8 positions and he will give us more physicality. I’ve had a good conversation with him and we’re hoping we will be able to get that one done.

“He was one of our main targets and we thought we’d missed out. We’ll know more about him during the early part of the week and hopefully, if everything falls into place, we should have three more in the building this week.”

On trialists Aaron Hayden and Kwame Thomas, he told us: “I told those lads that I would make a decision on them on Sunday. I’ll do that and I’ll let everybody know where we’re at on Monday.

“I think Mo Sagaf needs a little bit more time, but I’ve made it clear that I’m running with a smaller squad this season. That’s why I won’t rush, because every player must play a pivotal part.

“What we can’t hide away from is that we’ve missed out on some of our targets, there’s no doubt about that, but we’ve also targeted certain players where it’s taken longer than expected to get a decision.

“We have a list with first and second targets, and fallback players, and we have missed out on some, but on others we still haven’t had any kind of answer. The good thing is that I think it’ll be worth the wait because we’ll get good players in who are value for money.”

One trialist name not on the team sheet was Villa youngster Lewis Brunt, who had spent a two-week period with the club.

“Lewis went back to Aston Villa earlier in the week,” he commented. “We actually felt that he was making good progress, but we also felt that we needed more robustness in there.

“He’s only a lad of 18 and we didn’t think he was quite at the point where he was physically ready for the league. I’ve said all along that we have three great football players in those positions, but we need people with other attributes in that area at this moment in time.

“We really like him, we think he’s one for the future, so it’s something we’ll keep an eye on going forward. The one thing we don’t want to do is take a player in and not utilise him. It’s not fair on the player and it’s not fair on Aston Villa. Hopefully in six months to a year he’ll be ready to go again.”

The Cumbrians received a bit of a scare early in the second half when defender Christie Elliott left the pitch appearing to be complaining about a groin injury.

“We’re hoping he’s suffered a little twinge in his groin and nothing more,” he told us. “I think that’s what he was intimating, but until we properly assess him, we just won’t know.

“I think he’s going to prove to be a really good signing and a player the supporters will enjoy watching. He’s very committed and he likes to get forward, and we’re really happy with how he’s progressing.”

And his final word was for the fans.

“I’ve said about this club over and over, we’ve a brilliant away travelling support and it’s a club with big potential,” he said. “To come this distance for a friendly says everything about them.”