United boss Steven Pressley gave us his reaction to the Chester friendly shortly after full time on Tuesday night. 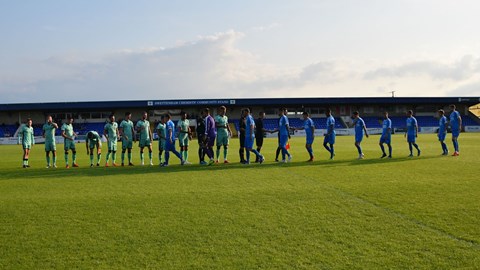 MATCH REPORT: Summary from the Chester away game

“The game was a brilliant exercise for us, especially the first 25 minutes where we were relentless in our football,” he said. “We kept the tempo really high and I was just disappointed with one or two things, but for what we wanted from the game the first 60 minutes for our players was excellent.

“We know we still need personnel in, we’re very much aware of that, but in terms of the things we’ve been working towards in the last couple of days – the energy levels, the distance we’re covering and the intensity of our football – they were absolutely perfect in this game.”

“As I say, we’re lacking a little bit at the top end of the pitch and we’re very much aware of that, but we’ll be working on that in the coming weeks,” he added. “But we did the basics of the game very well, we defended crosses and other dangerous moments in the way we’d discussed, which was good to see.

“Chester worked us hard and having just the ten men for the second half meant our players, and that includes the younger lads, had to work even harder. I spoke to the group at half time and I said that even though the situation wasn’t what we wanted, from a physical perspective it was better for us.

“It wasn’t an ideal situation, not what we wanted, but from the things we wanted to take from the game it actually benefitted us. What we have to remember is that there are loads of things we’re doing that we wouldn’t normally do.

“We’re taking throw-ins and set pieces as fast as we possibly can. We have centre backs taking those throw-ins and we’re using short corner kicks at every opportunity.

“That’s because we’re only looking for the physical aspects at this moment in time, and we don’t want to show our hand before the start of the season on things like free kicks and corner kicks. These are things we can keep in-house and we can bring them out when the real stuff starts.

“The second half was another chance to get more minutes for some of our younger players. It’s a great experience for them and they’ll only learn from it. A lot of kids don’t get the experience of playing against good teams like this at an early age.

“It’s what I did, and it’s also what players older than me did, and you find that you have to adapt quickly to the physical side of it. It can only help to improve them.”

On the ongoing search for new players to add to the mix, he commented: “We have our targets and, once we get them in, we’ll be a more potent team. There isn’t any more news on that at this stage, there’s nothing imminent, but we are still pursuing the same players, it’s just that we’re having to wait a little bit longer.

“It’s the same deals with the same clubs we’re looking at, and we’re very hopeful that they will get done. I feel we’re in a situation where we need three or four main strikers, and I also feel we need several midfield players. On top of that we probably need another defender, so we’ve still got a lot of work to do.

“We’re feeling very happy with what we’ve done so far, but I’m determined to get the right type of player into this club, and we don’t want to panic. There’s always the concern that the players won’t knit as quickly as you want them to when they arrive late, but the one thing that keeps me right in my mind is that the season can be 55 or 60 games long.

“If you get the wrong players in you’re going to have to endure those players for that period of time. That’s why if it takes new players a week or two to get up to speed then I’m willing to sacrifice that shorter period, because it’s a long, hard season.

“I think we’ve got the right characters in so far, and I don’t want to deviate from that strategy. We’re at a point where the group needs to see a few new faces, I’m also aware of that, because it always brings an additional energy when you manage to do that.

“I know everybody can get itchy and concerned about the situation, but I’m not concerned at this moment in time because we do have our targets. We’re speaking to the clubs, but it’s just the clubs are taking a little bit longer to give us the players than we anticipated.

“We’ll keep pursuing them, we’ll keep being patient, and hopefully we’ll get the players I believe will really help us to achieve this season.”


It’ll come as no surprise to anyone to hear that defender George Tanner has got his head down and put everything into his rehab programme following the nasty injury he picked up in the closing stages...

MANAGER: At the moment the world seems just a bit crazy


It feels like an age since the Blues last had a game but there’s certainly never a dull moment, with a number of factors coming together to make life a test for Chris Beech, his staff and his players...

YOUTH: I have no doubt he'll be more than fine


Championship side Blackburn Rovers head into today’s home game against Stoke City just five points shy of the play-off places, and there’s every possibility that they’ll have Carlisle youth graduate...


It’ll come as no surprise to anyone to hear that defender George Tanner has got his head down and put everything into his rehab programme following the nasty injury he picked up in the closing stages...