Manager Steven Pressley confirmed this week that he has a preferred formation in mind as he continues to put his charges through their paces with pre-season now into its second week. 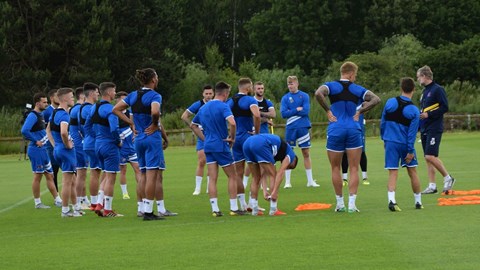 MANAGER: These lads have an opportunity show us what they can do

“4-3-3 is my preferred formation, and I like playing with one at the base and two more advanced in the midfield areas,” he told us. “All of the players within that have to have high energy and they’ve also got to be creative in that position.

“I see Harry [McKirdy] as a player who can play in any of the front three roles, but generally as more of a wide striker. He’s a terrific finisher, and he was probably one of the best finishers in the club when he was at Villa.

“He’s energetic, and in the testing we did prior to pre-season he was our best performer. He’s sharp and fast, and he’s got goals in him.

“I like to play with a front three where one of those three stays wider a bit more, and the other two are more like a main striker and a side striker. I see him more as a side striker.”

And with the first pre-season fixture now just five days away, he said: “With the group we do have they’ll play a certain amount of minutes in each game, and we’ll build that towards what we require as we go through the July fixtures.

“I don’t read too much into certain aspects of the pre-season friendlies, but there are certain things that are really key to me. I know everything must lead to the first game of the season where we’ll start being judged properly, but pre-season will allow us to grow and improve as a team.

“We’ve got a good variation in games. There are some of the teams who will play a certain style of football and test us in certain aspects, and teams that will ask us different questions.

“That is very much what League Two is. One week you can play a team who like to play football, and the following week you play a team that are far more direct, so it’s about being capable of adapting to those challenges. What I will be looking for is our players to have consistency in their performances.”

Whoever the opponents are through July, it’s all about being ready for August and what will be a very challenging first month of fixtures.

“The one thing I was really pleased with when the fixtures came out was that we’re at home for the first game of the season,” commented. “That was really the only thing I looked for. It gives us a really good opportunity to start the season in a positive manner.

“You can look at the other games at the start of the season and say it’s a good start, but it’s only a good start if you win the games. That’s certainly what we’ll be setting out to achieve.”