United boss Steven Pressley gave us his reaction to the Fleetwood friendly game shortly after full time on Saturday afternoon. 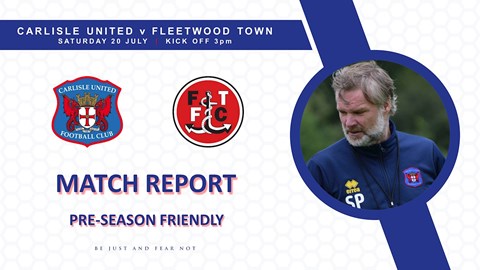 “It was a really good exercise for us on what was the final day of a really hard week,” he said. “I’m really pleased with the attitude and application of the group we have. We know where we’re short, and we need to add to that, but the way the lads are going about their business and carrying out the things we’re working on is fantastic at this moment in time.

“We carried out all the aspects we’d been working towards and the fitness levels shown by the players was terrific. Going forward we know that a team can’t sustain that type of intensity for 90 minutes.

“We’re asking them to do it at the moment, but once we get into the more competitive games you’ll see stages where we really press, and then there might be a period where we step off it a little bit more. What I’m trying to get out of the games just now is a level of physical development, alongside working on things in a tactical sense.

“As I keep saying, we know where we’re short, and that’s why we’re working hard to get players in, because that’s when we’ll be a really exciting team. We came out in such an aggressive manner through the first 30 minutes that we saw Kwame Thomas start to tire. Once one of your main pressers slows down it means you can’t press to the same effect.

“It’ll take a period of time to fully assess our two trial players. With Kwame, he got tired because he hasn’t trained the way we have, and it’ll take him a while to get up to speed. That’s perfectly normal.

“I asked Aaron [Hayden] if he’d ever played up front and he told me he had. He almost nearly scored, but I’d asked him to do us a favour and his attitude was great. We need to see both of these lads for a longer spell before we make any kind of decision.”

On the quality of the goal scored by the home side early in the game, he told us: “Our goal came from the type of work we’ve been doing on the training pitch, so I was really pleased to see that.

“It’s something I think Jack Bridge can add to his game. I said that after the goal he got against Hibs, because with the way we play we want to see our midfielders arriving in the box and getting into advanced positions.

“He did that to great effect, having started the move, and I thought all of our midfield players worked tirelessly. In Christie Elliott, who supplied the cross, we have a full back who I think will be really effective.

“We continue to talk to Jack about him arriving in the box because that’s part of his game he can really improve. He’s scored two goals against good opposition, but he has to take it into the season, which I think he will.”

Speaking about the pressing need to add new faces to the group, he commented: “We’re actually really happy with the way we’re progressing, even though we obviously need to add the final layers.

“When we do that we’ll be able to feel more optimistic because we’ll be a really effective unit. I’ve reassured everybody before that we have our targets, and I’d be more concerned if we were a club with a scattergun approach where we were prepared just to take anybody in. We’re not like that, we’re a club that’s very focused on our targets and we’re going to keep pursuing those, hopefully to a successful conclusion.

“There’s nothing imminent on that at this stage but we hope, come Tuesday or Wednesday, that we will have some news. We’ve been told to expect that we’ll see a player arrive on Wednesday, and that’s our hope at this moment in time.

“We believe somebody will be here by Wednesday, we’ve been assured of that, and I know I’ve said this before, but that’s the truth. We’ve been assured he’ll arrive and we’re hopeful that will be the case.”

“What we have to understand is that I could bring 10 players in tomorrow, but they wouldn’t be the right kind of players for us,” he continued. “The important thing for us is that we have our targets and it’s a very focused recruitment process.

“Our aim is to get the players we’ve identified, that’s the bottom line. We’re really comfortable with where we are with it, but of course we would love to have the players in now. The reason we’re prepared to wait is that we think they’re very much worth the wait.

“We’re very clear about what we need, and we know what kind of profile we need in those areas. It’s not just about bringing in personnel, it’s about bringing in players with the right qualities. That’s why we’re happy to take our time.

“I understand that the fans want it to happen now, that’s completely normal, but the reason I’m comfortable is because I know the season doesn’t just last for one week. It goes on for a long, long time and the supporters have to endure 55 games or more.

“I think they’ll be happier to endure a little bit of frustration in pre-season as we wait for the right players, than if we get the wrong players and we have to go through a disappointing season.

“I’ve had a number of players offered to me but I’m determined to get the types of player I need for the way we’re going to play, and not just anybody because they’re available.”

“All I can say to the fans is that they have to trust us,” he said. “They have to believe that we are working hard. I get offered players every day, and I could easily bring them in, but they’re not the type of players I want.

I’d have loved to have had the squad together earlier, but the circumstances haven’t allowed that. I’m clear on the players I want, and I believe I’m going to get them.

“I think we have to adopt this approach because it is such a long season. I’m sure the fans would rather see a group of players that excited them than me signing players that gave them a bit of relief, but who actually aren’t good enough to get us to where we want to be.”