United face League One outfit Tranmere Rovers tonight as they complete their series of home friendly fixtures, with just Ross County to play before the season kicks off in earnest at the beginning of August. 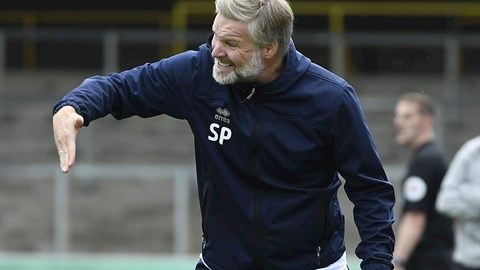 MANAGER: The success of a team generally is down to the strikers

Speaking ahead of the game, manager Steven Pressley said: “The big thing over the next couple of weeks is to start to add more layers of game management to what we’re doing so that we control what we’re doing in games as much as we possibly can.

“Tranmere are an extremely good side, we saw that last season, and they’ll provide us with another stiff test. They’re a very physical and experienced side, and they also look to play the game properly.”

“From us, we’ll see a similar type of team and we’ll continue to push. We’ll be looking to progress again because we know we’ll be fully judged when we play Crawley Town.

“I’m really happy with the way the team are going about it at the moment and, to be perfectly honest, I couldn’t ask for any more from the current group.”

With second year youth midfielder Josh Galloway being the latest to make a step up, having started the game against Fleetwood, the manager told us: “Once you give kids the opportunity and they train with you every day, you start to see a real progression in them.

“I’ve always been a coach who gives young lads a chance and I actually think this club has underestimated some of the quality we have here.

“Josh is one of those, and hopefully we’ll see other young players come on as well. He hasn’t trained with us loads, but he really got to grips with how to press and when to recover, and he did it really well.

“I’m happy with how everybody is grasping it, but I was particularly pleased with his attitude to Saturday’s game. When he develops physically I think we’ve got a really good player on our hands there.”

With the captain’s armband having been worn by a number of players through the summer so far, the manager said: “We do have a number who could comfortably take that role on. The group has some natural leaders at the moment, so I’ll make my decision over the next two weeks on that.”

INTERVIEW: We'll continue to look to do things properly


United face Grimsby at Blundell Park on Saturday afternoon and we spoke to assistant head coach Gav Skelton about the game as the Blues continue to prepare for a double-header of tough away fixtures.


The return to the starting line-up for midfielder Jack Bridge, who was just one of many to give a potential man of the match performance on Tuesday night, highlighted once again the level of...


The Blues recorded a comfortable home victory over Newport County at Brunton Park on Tuesday evening and we spoke to Gav Skelton shortly after full time about what had been another solid performance.


The Premier League, EFL and PFA met today and discussed the growing seriousness of the COVID-19 pandemic.


Blues Lottery and Premier draws scheduled for Friday 27 March will hopefully now take place on Friday 24 April, depending on the government review on the current three-week lock down.


The EFL Trust continues to support Network Rail and the British Transport Police (BTP) to help tackle the increasing number of people risking their lives on the railway and in the desire to spread...