Attacking wide man Harry McKirdy arrived from Aston Villa in the summer with a wealth of experience of League Two football, having enjoyed recent loan spells at this level, and a determination to make his mark having joined the Blues on a permanent deal. 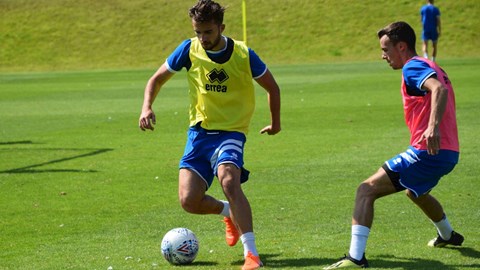 And he confirmed this week that he feels like he’s really settled into his new surroundings with a testing and gruelling pre-season tucked securely under his belt.

“It’s been good, but it’s been tough,” he said. “You don’t remember how tough pre-seasons are after you’ve done them, but this one has been really tough.

“I feel like I’m getting there with my fitness and I always think that if you don’t play great during pre-season you just have to put it behind you. It’s all about getting fit and as long as I’m ready for next Saturday, that’s the main thing.

“I’ve been out on loan three times, so I know what this level is about, but this is the best group I’ve worked with. The way we try to play football is good so it’s going to be about putting that into results and being consistent when the season starts.

“It feels like it’s been a really long pre-season and we just want to get playing and get on with the season. As far as me settling goes, it helps that this is my club. I think when you go to certain clubs on loan people don’t feel like you’re buying into it, even though you are.

“I’m here now, I’ve settled in and I’ve had a really good pre-season. I’m just looking forward to getting on with it now.”

“I’ve completely settled in now,” he added. “It’s a fairly new group but I’m enjoying it up here. Hopefully more new faces will be in soon and we’ve seen that the gaffer has stuck to his guns with the way he wants to bring players in.

“He’s said he could have had anybody, but he’s talked about waiting for the right men all the way through summer. We had a meeting the other day and we trust the gaffer on what he’s doing with all of that.”

Speaking more about that style of play, which has seen him flourish against some good opposition, he told us: “We have a structured way where the manager likes us to press, and he’s very clear on where he wants us to be, but once we’re attacking I have the freedom get on the ball and enjoy myself.

“I’ve never played out wide before as much as this, normally I’m more in the middle. When I’ve been struggling to get in the team I’ve filled in out on the wing a few times, but hopefully I’ll be playing there more this season.

“I’ve really enjoyed it, to be fair, because I’ve seen much more of the ball. On Saturday I didn’t really touch the ball when we played Fleetwood, so you can start sulking and that’s when you want to drift inside, but on Tuesday I was on it a lot and I really enjoyed it.”

The midweek outing against Tranmere saw the crowd warm to his efforts as he showed a positive and forward-looking streak with almost every touch of the ball.

“I wouldn’t say I’ve gone out there showboating, but when I’ve had the ball I’ve felt confident,” he confirmed. “I’m the type of player who wants to run at people as much as possible.

“I want to entertain the crowd – Gav [Skelton] told me to get out there and entertain them, and whenever I have the ball I just want the fans to be excited. Hearing them clapping and stuff when I’m trying to go past players is really good.

“I don’t think I’ve ever had that before when I’ve been out on loan at other clubs. I haven’t really had the opportunity to play week in and week out, which is when you can really show the fans what you can do.

“It’s been more a situation where I was coming on for 20 minutes and trying to make things happen, which can be hard. I feel more comfortable now. I’ve grown up watching football and you go to games to watch the players who get you excited. I want to do that here because I can see that the fans really appreciate it.”

And with the manager talking about the livewire attacking playmaker being one of the members of the group who can create the ‘moments’ which can win games, he said: “When I met him in the summer I knew the way he talked about how he wanted us to play was going to suit me.

“It’s down to me now to do what he needs me to do. I’ve grown up being a striker, so I love scoring goals, it’s my favourite thing to do. I’ve had a few chances so far but I’m saving them for the season, I think.

“I know what I can do and I feel confident that I’ll be able to help the lads. I know I can score goals, I’m a good finisher, so I know they’ll come. Not scoring a goal during pre-season isn’t something I allow to bother me. It’s about getting the sharpness up more than anything else.

“Like I say, the way the fans have reacted to what I try to do gives you confidence, but you don’t want to get carried away. It’s just about getting through pre-season as fit as you can be that matters.

“If I start doing good things when the seasons starts, I think that will be when everybody can talk about it. I don’t want to get carried away at the moment because I haven’t done that yet.”

The next part of the build up for the Blues is the five-hour plus trip to Ross County this weekend, with the journey a good taster of what’s to come throughout the campaign.

“I was talking to Dolly the other day about the Swindon trip and he was like ‘yeah, it’s not that far, it’s only five hours’ and that sums it up really,” he joked.

“I’ve never had to do so many journeys that are this far before, but you just have to get used to it.”

So, does he feel that it’s good to kick the season off at home?

And we can’t argue with that!