New arrival Nathaniel Knight-Percival joined up with his new team mates for the first time this morning having just put pen-to-paper on a new deal with the club on Thursday afternoon.

The experienced 32-year-old centre back has been a near ever-present with both Bradford and Shrewsbury over the course of the last four seasons and he confirmed that he’s looking for more of the same as he takes up this new challenge with the Blues.

“I think it was probably time for a change,” he said. “When you’ve been somewhere for a while you can get set in your ways, so it’s nice to be able to get out of that scenario and start a fresh challenge.

“I’m really looking forward to it and all I want is to play as many games as I can. Hopefully I’ll be able to chip in with a few goals at the other end as well. It’s good that our first friendly is next week because I’m looking forward to getting started.”

Having been courted by United boss Steven Pressley for most of the summer, he commented: “It’s great to get the deal done because it’s probably been a few weeks in the process. That’s why it’s nice to actually have it wrapped up.

“Everyone knows what you’ve got to go through in pre-season but the running and hard days put you in good stead for the rest of the season. That’s why it’ll be good to meet the rest of the lads and get on with it all.

“I can now start settling in with training and meeting the rest of the group, which is the important thing. I’ve been training over the summer with a bit of running, and I’ve been in the gym as well, so hopefully I won’t be too far behind.”

With other options on the table, he explained that the move to Cumbria had always been high on the list with the gaffer having ticked a lot of boxes with his vision and ambition through a series of meetings.

“We spoke quite early in the summer, to be honest,” he confirmed. “We talked about how the length of the deal can be beneficial for both sides and things like that.

“It’s perfect for me and it’s a good move for my family as well. When it comes down to it, family is one of the things you think about first and foremost for any move, and this fits for us.

“I made my final decision a few days ago. I came up on Monday and met the gaffer again, and then I had some time to think about it with my family. That’s when I came to the decision to come here.

“He showed me round and he’s told me about how he likes to play. When he spoke about the high tempo and the passing style of football, I think that’s what really excited me.

“His personality and how he is was another thing which brought me here. After speaking with him it felt like we had the same vision, and that’s another big part of why I’m here.

“As I said earlier, the biggest thing I want is to be enjoying my football. That’s paramount. From there I want to be winning games and keeping clean sheets. If that all comes together I’ll be really happy.” 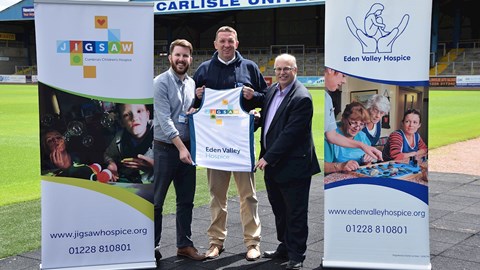 CARLISLE HALF: Eden Valley Hospice charity of the year

As to what we can expect to see on the pitch, he told us: “I’m aggressive and I’m just aware of people and where they are on the pitch. I like to defend but I like to cause problems at the other end as well.

“The move is about looking for a new challenge. I did it a few years ago when I went to Shrewsbury, and we got promotion there, so it’s about looking at what your options are and what will suit you best. I think this is the right place for me to be.

“I think you still get nervous, regardless of your age, whenever you start with a new team. It’s also exciting as well, so I’m looking forward to it. There are a lot of new faces in this squad so there’s quite a few people in the same situation. It’s pretty much the same at this stage for every club every year.”

A late bloomer in terms of reaching the professional ranks, he admitted that the step up from non-league to Championship football with Peterborough had provided a huge learning curve and some valuable experiences.

“I played non-league until I was about 23 or 24, and that was when I went to Peterborough,” he said. “It was tough taking that first step up, but I knew it was an opportunity I couldn’t turn down. I thoroughly enjoyed my time with them and I gained a lot of good experience there.

“Winning the JPT with Peterborough and the promotion with Shrewsbury are probably the highlights of my career so far. Getting to the play-off final with Bradford was also good, and I had some good seasons with them.

“It was disappointing how it went last season - but that’s last season. All I’m doing now is looking ahead. I wouldn’t like to jump the gun on anything, but we’ll be looking to win as many games as possible and we’ll see where that takes us.

“That’s always the best way to look at it at the start of any new season.”

Click HERE to watch an interview with Nathaniel Knight-Percival on iFollow United now.