We spoke to defender Jarrad Branthwaite ahead of training on Thursday to get his thoughts on the first friendly of pre-season against Hibs on Tuesday night. 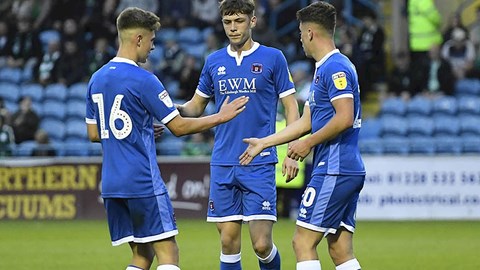 MANAGER: It was a great experience for them

“Last Tuesday night was really enjoyable,” he said. “I was a bit nervous going into the game, but I thought I settled into it and played fairly well, and it was just a great experience.

“The gaffer has been playing me at right back in training and he wanted me to do a job there in the game so he could see what I was like. I thought I did ok there and I felt like I adapted to it quite well.

“It's completely different doing it in training compared to a game, but the gaffer wants me to develop playing there. He wants me to play in different positions, and that’s one of them, so I was happy with that.

“I know the gaffer mentioned that I had a bad training session playing at right back a few days before the game, and that was true. That can be hard to deal with when you’re with the first team, but you’ve just got to get on with it. It’s part and parcel of football."

On how he settled into the swing of things against Hibs, he commented: “In any game it’s just about getting your first touch right, and I managed to do that on Tuesday, which gives you confidence.

"I played next to Byron [Webster] and he’s a real leader. He helped me through the game and he was guiding me when I got into any sticky situations, which really helped."

“To be involved with the first team for pre-season is really enjoyable and I’m on a real high at the moment," he told us. "I’m enjoying my football and I just want to keep developing from here.

"The gaffer has been really good with me and he’s giving me lots of advicem and I do feel like I’m growing as a player and a person. It’s good having a manager who really wants to help you, but he also knows when to push me and where I need to improve.

“I’m still a second year so the youth team lads are having a couple of digs at me now and again, but it’s all good fun! I just want to keep pushing on as a player and see where I can go from here.”

Click HERE to watch an interview with Jarrad Branthwaite on iFollow United now.