Strength and conditioning coach Dave Waldie has spent much of the summer preparing a pre-season training programme which will form the major part of what manager Steven Pressley has promised will be a ‘tough and testing month.’ 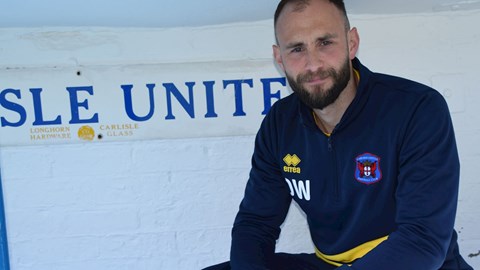 INTERVIEW: The job and position I really wanted

Back to work last week, with a series of fitness tests and checks for the players, he admitted that it was good to be out on the training pitch once again as the players start to get into the swing of things once more.

“I’ve missed it, to be fair,” he told us. “We have a lot of new faces coming in, but I’ve missed being at work. It’s good to have a fresh start but it’s really just a case of keeping the ball rolling from what we were doing last season.

“It’s nice to have a clean slate and a fresh set of lads to try and influence.”

Part of his build up to the return of the squad was the compiling of an extensive pre-season training package with gym work, running sessions and football practices interweaved to create a series of sessions designed to test and engage the group.

“I do get a bit, not OCD, but I like to be prepared for everything,” he explained. “I spoke with the gaffer at the end of last season about where he wants to go with pre-season, and I’ve put that structure down for all of the fitness, strength work and things we’ll do in the gym.

“I work around the plan the gaffer wants, which I’m more than happy with. We try and cover every detail as much as possible. Plans change, we’re flexible in that sense, but the sort of players we’re trying to recruit really fit into my mentality with regard to their attitude to gym work and to training. I’m more than happy with the route we’re taking.

“Fitness is just so important. You can’t carry out the tactical work the manager wants and the style of play he wants to adopt if the lads aren’t fit and able enough to do that task. I think we struggled with that at stages last season. Hopefully we’ll put the work in through pre-season in order to implement it in the way the gaffer wants to.”

With so much emphasis on the physical fitness side of things going forward, he confirmed that preparations had started for what they are about face back in May.

“The lads from last season have had comprehensive off-season plans, which hopefully they’ve been following,” he commented. “I’ve been keeping tabs on them through the off-season.

“We’ve tried to find a balance between letting them have some free time away from being told what to do for a couple of weeks, relaxing with their families. Hopefully they come back in a state ready for the tough pre-season. If they come back in poor shape it’s going to be an uphill struggle from there.

“We have to balance up how much running and gym work they do, and we always have to be conscious of picking up injuries. Injuries do happen in football, but we’ll just try and plan and do all the preventative work the research suggests we should be doing in order to try and minimise this.”

“The main spine of the pre-season to start with is getting straight into 11v11 work,” he added. “We’ll control the volume of everything else from that.

“It’ll be a case of building up from shorter games to quite decent periods of 11v11 work, multi-ball, so there’s no real stoppage in play and it gets to be really intense. We’ll be doing some running on top of that as well.

“But going from feedback from players and coaches in the past, and I used to play a little bit myself, it’s so much easier if the running is interspersed within the football, from a motivational point of view. It’s sort of mixed in between running/football, football/running.”

Step one of that build up was last Thursday’s testing day, which brought the group together for the first time under the guidance of the strength and conditioning department.

“The guidelines we gave them were maximum targets for their weight over the summer, their body fat and their heart and lung fitness,” he said. “We’ve re-tested all of those, and as soon as we got a new player signed, I’ve been in contact with them and given them the same set of guidelines.

“Part of the testing was a 1,400m run, weight and body fat, and they all did really well, especially the young lads. It’s more if they came back overweight or unfit, from the standards we’ve set, they’d be starting pre-season early, on Monday.

“If not, if they’ve looked after themselves over the summer, they get another few days off. A couple of the lads I was expecting to be borderline have come back and been in the gym, doing the off-season plan, so that shows they’ve bought into it and I was quite impressed, especially with their run.

“A lot of them came in 15-25 seconds under what their minimum standard was. I’m very pleased so far.”

A big part of the job, when it comes to getting the players to push themselves just a little bit further, is having their trust and respect, and being able to motivate them and keep them going, particularly when the going gets tough.

“That part of it is really just about getting to know the players,” he told us. “I like to think I’m quite approachable, I’ll be totally honest with the players, if there’s areas they need to develop I’ll try and highlight that for them.

“Some will be subjective views, some will be objective. I quite like numbers to highlight areas where they need to improve. It’s knowing your players, being approachable, wanting the best for them and understanding where they’re coming from. I like to try and get to know them a little bit, but we have to do it pretty quickly.

“I think I’ve got the experience and know-how and a lot of the time it’s just getting the lads to buy into it. You can have the best training programmes in the world, but if the lads don’t buy into it, you’re wasting your time.

“That’s why it’s important for me to get to know the players. To help with that we’ll do some assessments to see where their strengths and areas for development are. It’s a long season, so I need to make sure that if the lads are training in the gym that they’ll be technically competent at all the exercises.

“Every afternoon will be spent working on technique, getting individual scores, so we can prescribe different individualised loads for the players. Technique is vitally important because if they’re competent it gets them to buy into the programme.”

Click HERE to watch an interview with Dave Waldie on iFollow United now.