Carlisle United are delighted to announce that local lad Josh Dixon has today agreed a new two-year deal [with an option] which keeps him at Brunton Park until at least the summer of 2021. 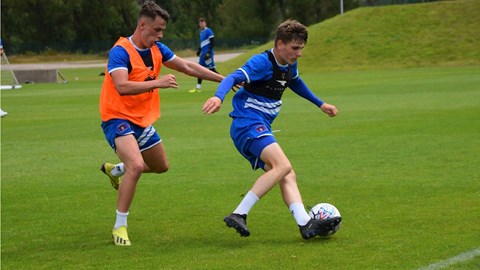 Dixon, 18, overcame a cruciate ligament injury which ruled him out of much of his second year as a scholar to earn his first professional contract at the end of last season.

His attitude during pre-season has been exemplary and his no-nonsense approach has caught the eye of manager Steve Pressley, who has subsequently worked quickly to tie the talented playmaker to the club.

“He’s shown great signs over the last few weeks and as a club we want to protect ourselves and our prized assets,” the manager said. “I’ve been delighted with him in the way he’s applied himself and the potential he’s shown has been magnificent.

“I’ve made it clear to him that he still has a long way to go, but in the short period of time I’ve worked with him I’ve seen that there is a real opportunity for him to kick on and have a good career.

“An important thing once you’ve seen the potential in a player is to then look at his character. He’s from a very good family and he’s a solid young man, and we want him to continue his development here as a Carlisle United player.”

“I’ve said all along that the young players at any football club are always vital,” he added. “The good young players bring an energy and a real desire to play for their club.

“That’s an infectious quality and when I see that in a young man I always want to harness it and reward it. As for how far Josh can go, we just don’t know yet. All of the attributes are there, but he hasn’t yet been tested in a competitive first team game.

“Having seen him against Hibs, I think he’ll cope, but there’s a lot of work ahead of him still to do. The one thing I will say is that if we put the work in with Josh, as we are, we want to see the fruits of it here, at this club.

“With this deal now done we’re in a situation where the club, the player and his family are working together and we’re already seeing the reward from that.”

Director of football David Holdsworth said: “I met with Josh’s parents this afternoon and obviously we're all delighted that this young man has shown real potential and a real desire to progress.

“We want to be part of his development and we want that to lead to him doing good things for the club he's grown up supporting. We’re all really pleased and we’re looking forward to seeing him push on from here.”

Dixon joined the club’s academy as a nine-year-old and worked his way through the age groups.

An attack minded midfielder, with an eye for a pass, he settled quickly into the professional ranks and is currently enjoying his first full pre-season with the first team squad.