Joint caretaker manager Tommy Wright gave us his reaction to the winning run of six consecutive victories having come to a close at Northampton on Saturday. 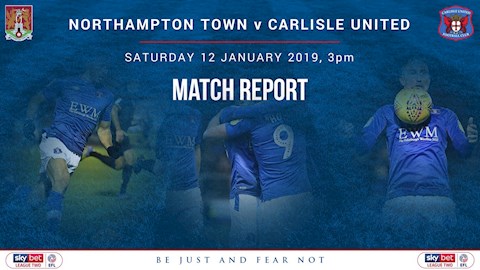 “It’s disappointing, but I think we created enough chances to have got something, particularly in the first half,” he said. “Credit to Keith Curle and Northampton because the game got stretched and they turned us round and made it difficult.

“I thought there were a lot of good points to come out of the game because we did make some good chances. Even in the second half, we changed it to put the two big lads in the box and I thought Connor [Simpson] could have scored on his debut.

“Overall we’re disappointed with the result, but the performance was good in patches. We know we need to get better, which we will, but we do need reinforcements. You could see that Yates and Nadesan were missed and, with no disrespect to the other players, we need people of that calibre.

“I’ve spoken to David Holdsworth and the chairman about that, so it’s now about us getting the right players. The backing is there, so we’ll try our hardest to get them in.”

“We saw again how decisive the first goal can be at every level of this game,” he added. “We were on top in the first half and if we’d got the goal we’d probably go on to win it.

“We’ll look at it and we know there’s areas we need to work on. I think conceding the goals when we did knocked the energy levels down a little bit. Letting goals in does affect you mentally and physically, and you have to try to overcome that.

“It’s a bit annoying really because we spoke about it at half time. I don’t think we start games very well, first or second half. When I look at the notes I take they show that we aren’t good starters and that’s why we emphasised to the players that we needed to be on the front-foot.

“Unfortunately we went to sleep and we conceded, and that left us chasing the game. The players are holding their hands up, but we need to be realistic. We’ve been on a great run, it’s come to an end, so all we can do is bounce back and get on another one.

“We had enough opportunities to score, we didn’t, so we need to make sure we keep making those chances. It’s a defeat and we need to take it on the chin. Don’t get too low about it, but make sure you react to it and be better next time you go onto the pitch.

“I think it was Iain Dowie who first came up with the word ‘bouncebackability’. It hits the nail on the head. Teams get beat every week and it’s how you deal with it that matters. We’re in a good place, but we have to stay positive.

“I’m really disappointed for the fans, but they aren’t stupid. They know the situation we’re in and they know if we get our players back, or a couple more, we’ll be strong and we’ll be challenging.

“We’ve been saying all season that we’re a bit light on bodies and everybody can see that. There’s depth in the striking positions but Yates was a massive player for us. When we started putting him up front we got ourselves on a run, and it’s players of that calibre we need.”

On the likelihood of the Rotherham forward coming back to Cumbria, he said: “I’ve spoken to Paul Warne and I know he’s looking to get players in. Obviously they can’t let him go until that happens.

“They’ve been really good with us, they’ve kept us informed every step of the way, so it certainly isn’t dead. However, I wouldn’t say it’s nailed on either. He wants to come back, but we’ll have to see what happens with them getting the players they need.

“Ashley [Nadesan] started for Fleetwood so it doesn’t look great for us if he’s back in the picture there. The hopeful bit is that he can only come to us now if things change.”

“We’re talking all the time with David Holdsworth about targets we’re looking at,” he confirmed. “Everybody is after good players and they aren’t easy to come by. There’s no point bringing people in who aren’t ready to play.

“We need a good, quality striker who can help us to put teams on the back foot.”

Having taken charge of his second game as joint caretaker manager, he confirmed that the most important thing is for a quick resolution to the current situation.

“I’ll just keep doing the job,” he said. “I don’t think it can go on for too long, and I’ve said that to David. You’re in a grey area and people don’t know exactly what’s happening. The big thing is to get it done as soon as you can so you can keep the momentum going. I’ve been in these situations before where it’s dragged on for six or seven weeks and that helps nobody.

“Hopefully it’ll be sorted in the next couple of weeks, one way or the other. That could be with me and Muzz, or with somebody new. The club has a decision to make and whoever gets the job has got a good chance of doing something, because there are some good players here.

“We’re still in the play-off places, but nothing is won in January. The fans have been good with what we’re doing, and that’s better than being criticised, that’s for sure. I’m experienced enough to know that I have to keep my focus on the football, because we need to be picking up points.”

On a first league start for Liam McCarron, he commented: “This is the only way he’ll learn. He made mistakes, but he’s a confident lad and he kept going. We have faith in the kid, we’ll look after him and we’ll try to make him a better player.

“It was a difficult game for him to come on in, but he got a couple of chances by being in the right place. That’s a big factor.

“I’m still very positive despite this result. We’re still in the mix and it’s up to us to keep it that way.”