Defender Peter Grant was one of three players who joined the Blues on a hectic Tuesday afternoon having negotiated a release from Plymouth to make way for his move up north. 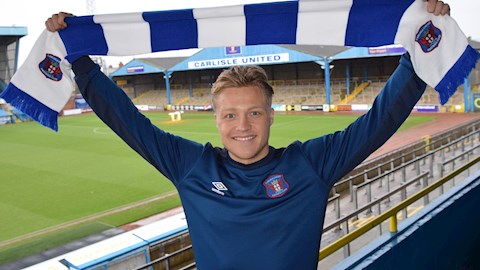 Manager Steven Pressley spoke to us about the acquisition of the big centre back this week.

“Peter is a player I have been aware of for some time,” he said. “He played at a previous club I played and managed at, up in Falkirk, and he made a very good impression there.

“He’s played eight games in League One so he has good experience for one so young. He comes from great stock and his father has been a brilliant influence on him. He’s a wonderful kid with a terrific attitude and he has leadership qualities which are good to see.”

“The one concern we have is that we pick up an injury to one of the two centre backs who have already been huge for this club this year,” he explained. “There was no real back-up there for us, if that happened, so it was important that we brought in someone like Peter who could cover that role and compete in that area, which will obviously push the two of them.

“It’s good that he’s signed for us because one of the considerations we need to be mindful of is that we can only name five loan players on the team sheet. He did have a contract with Plymouth, but he’s managed to negotiate out of that so that he could join us on a contract basis. That’s been a good piece of business for us.”

In terms of what we can expect to see, he said: “He’s a little bit of a throwback. You’re getting a defender who can stand up to the game and who can defend the basics of football which are required in this league. He’s a really good talker and communicator and he suits what we require within the way we play.

“His family lives in Plymouth so this move doesn’t suit him geographically at all. He’ll stay up here permanently. His brother plays for Clyde, so he’ll see more of him, but probably not so much of his parents.”